BBC: The latest report from UN weapons inspectors has raised new fears that Iran could be building the capability to make nuclear weapons. 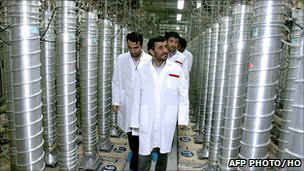 The latest report from UN weapons inspectors has raised new fears that Iran could be building the capability to make nuclear weapons.

Until now, most experts believed that there were certain clear “red lines” that Iran would need to cross in order to make a bomb. Most importantly, it would need to block UN monitoring, in order to divert uranium from the existing programme to make it suitable for a nuclear warhead.

But it seems from the latest UN report that Iran is trying to stretch or blur those “red lines”, enabling it to move closer to the ability to make a bomb without a major confrontation with the UN or the West.

Iran has continued to allow access to the UN inspectors – any attempt by Iran to end that would trigger a major international crisis.

But the latest International Atomic Energy Agency (IAEA) report shows Iran is playing a delicate game, co-operating, but at the same time limiting the UN’s access to key plants and information.

The leading think-tank, the Institute for Science and International Security (ISIS), said Iran was taking a “minimalist” approach to its so-called Safeguards agreement with the nuclear inspectors, under which they are granted access to monitor the nuclear programme.

The ISIS warned that Iran was “degrading” that Safeguards agreement to such an extent that there was now a danger of Iran diverting uranium into a bomb-making programme and of that remaining undetected for a significant period of time.

Amongst the issues raising concern is Iran’s policy on which inspectors to accept.

The IAEA believes Iran is trying to exclude inspectors with a good knowledge of Iran’s programme in favour of those with less experience of it.

Iran has also refused to provide detailed plans of new plants outside Qom and in Arak.

Whether Iran is in breach of its agreement with the UN by doing this is disputed.

But the IAEA says Iran’s approach “does not allow the agency to build confidence in the peaceful nature of Iran’s nuclear activities”.

Or as the ISIS puts it – the approach increases fears that “Iran may seek to increase its capability to divert nuclear material in secret and produce weapon-grade uranium in a plant unknown to the inspectors or western intelligence agencies”.

Until recently Iran was only enriching uranium to around 3.5%. To make a nuclear bomb this would need to be further enriched to around 95% purity.

That process would take at least a year, and it would be difficult to do it in secret, unless Iran took the radical step of expelling the UN inspectors. That, the theory goes, would give the world a clear warning sign, time to rally an international coalition to take action.

But Iran has now produced 22kgs of uranium enriched to 20%.

The Iranian government says it needs this to fuel the Tehran research reactor, though outside experts doubt that Iran has the know-how to convert it into a useable form for this purpose.

And by producing this higher grade of uranium, Iran is also reducing the time it would take to enrich it to weapons grade, perhaps down to just a matter of months.

Instead, Iran is managing to keep most of its differences with the inspectors “under the radar”, never precipitating a major head-to-head confrontation.

None of this is proof, or even clear evidence, that Iran intends to build a bomb.

Iran insists that its uranium enrichment programme is purely peaceful. But none of the uranium being produced at the controversial Natanz plant is being used in the newly opened Bushehr reactor, Iran’s only major reactor.

Iranian officials do enjoy outwitting the West as a point of pride.

There are advantages for Tehran in building up its capability to make a bomb, without necessarily taking the final decisive step in that direction.

And a recent report by another leading think-tank, the International Institute for Strategic Studies (IISS), not to be confused with the ISIS, pointed out that Iran was unlikely to have workable delivery system, in other words a big enough missile to use with a nuclear bomb, until around at least 2015.

Nevertheless, this latest UN report is likely to increase nervousness in Western capitals that the sooner or later the dispute over the Iranian nuclear programme may come to a head.

Reuters: Iran said on Friday it would respond in...