AFP: Western nations on Wednesday called for tougher action to implement UN sanctions against Iran as world powers planned to meet in New York next week on Tehran’s nuclear program. 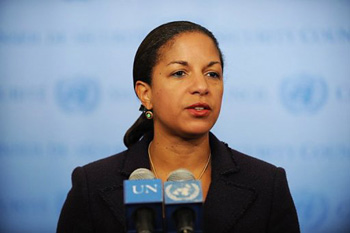 Amid a wave of new international concern over Iran’s activities, the United States, Britain and France said more countries must report on how they are implementing the four rounds of sanctions imposed by the UN Security Council.

US ambassador Susan Rice told a Security Council sanctions meeting that “Iran is refusing to address our proliferation concerns and appears determined to acquire a nuclear weapon.”

The 15-member council and the sanctions committee “will need to consider an appropriate response to Iran’s serial violations of Security Council resolutions,” she said.

There is an “urgent need to redouble our efforts to implement the UN sanctions.”

“Already we have seen unprecedented efforts to respond to Iran’s defiance of pressure in line with the dual track approach. Member states should move quickly to carry out their obligations to implement the new sanctions,” Rice said.

“We do expect that there will be a ‘P5 plus one’ meeting to review where we are in terms of trying to encourage Iran to come forward and engage constructively with the international community,” said US State Department spokesman Philip Crowley.

The Security Council’s five permanent members — Britain, China, France, Russia and the United States — along with Germany have led efforts to negotiate with Iran on its nuclear drive.

An offer of talks and international cooperation has been pursued in parallel with the sanctions — the so-called “dual track” approach.

The last sanctions were imposed on June 9, when 36 individuals were made the target of a travel ban and an assets freeze was ordered against 40 new Iranian entities.

A sanctions committee report said only 36 countries have so far sent documents on how they are carrying out the restrictions.

“The committee regrets that many states have not responded in a timely fashion, as these reports provide important information that helps the committee assess the implementation of the imposed measures,” said the report.

The United States, Britain and France said more countries have to give details on their actions.

Iran denies that it seeks a nuclear bomb but the latest International Atomic Energy Agency (IAEA) report on the Iran standoff said that the Islamic republic has increasing amounts of low-enriched and 20-percent-enriched uranium.

The agency complained this week that Iran has barred key inspectors from entering the country, saying it hampered the IAEA investigation.

“The Iranian nuclear program has no credible civil application and Iran’s cooperation with the agency is insufficient and getting worse,” said France’s UN ambassador, Gerard Araud. “Our response must be resolute.”

Foreign ministers from the six international powers are to hold a meeting on Iran on the sidelines of the UN General Assembly in New York next week. Diplomats said it would probably be on September 22, with political directors from the countries meeting a day before.

Iran gets an unlikely visitor, an American plane

New York Times:  Iran had an unlikely visitor: a plane,...