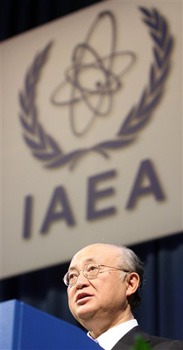 Yukiya Amano, director general of the International Atomic Energy Agency (IAEA), voiced growing frustration at what the Vienna-based body sees as Iran’s failure to address allegations it may be working to develop a nuclear-armed missile.

“We are not saying that Iran has a nuclear weapons programme. We have concerns and we want to clarify the matter,” he told a news conference.

Amano said the IAEA had received since late last year some “information raising further concern”, suggesting it was about alleged activities both before and after 2004. He did not give any details.

Iran denies Western accusations it is seeking nuclear weapons capability, saying its atomic activities are aimed at generating electricity so it can export more of its oil and gas.

For several years, the IAEA has been investigating Western intelligence reports indicating Iran has coordinated efforts to process uranium, test explosives at high altitude and revamp a ballistic missile cone to it can take a nuclear warhead.

Iran has dismissed the allegations as forged.

In a confidential report last month, the IAEA said it has received new information regarding accusations of possible military dimensions to Iran’s nuclear work.

Amano declined to say where the information came from, but added: “We are collecting information from various sources. Normally we do not depend on one single source of information.”

Amano, who has taken a blunter approach on Iran than his predecessor Mohamed ElBaradei, said in his first report on Iran’s nuclear programme a year ago that he feared Iran may be currently working to develop a nuclear-armed missile.

The assessment further strained relations with Iran, which says it is fully cooperating with the IAEA and that its nuclear facilities are under agency oversight.

“We would like to interact with Iran on clarification of issues with possible military dimension,” Amano said.

“Unfortunately since I came into office Iran has not engaged with us in the clarification of issues that might have military dimensions. Therefore, there has not been progress,” he said.

Enriched uranium can be used to fuel nuclear power plants, which is Iran’s stated aim, or provide material for bombs if processed much further.

Western powers suspect Iran is secretly bent on building a nuclear weapons capability from its enrichment programme, which Tehran denies.

They have warned of further tightening their sanctions pressure on the Islamic Republic, after talks in December and January failed to make any progress towards resolving the long-running dispute. (Reporting by Fredrik Dahl and Sylvia Westall; Editing by Jon Hemming)

AFP: Hundreds of Iranian Kurds have clashed violently with...