AFP: Nigerian prosecutors on Monday amended the charges against an alleged Iranian Revolutionary Guard member on trial over a shipment of rockets, explosives and grenades seized in the West African nation. 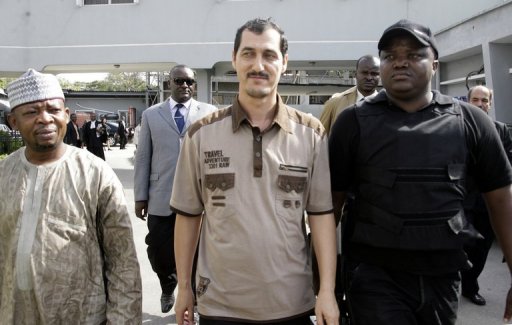 LAGOS (AFP) — Nigerian prosecutors on Monday amended the charges against an alleged Iranian Revolutionary Guard member on trial over a shipment of rockets, explosives and grenades seized in the West African nation.

The court was supposed to hold a bail hearing for Azim Aghajani and Nigerian suspect Ali Abbas Jega on Monday, but prosecutors instead replaced the three existing charges against them with four new ones.

The new charges read out in court are similar to the old accusations, but provide more specifics on the types of weapons involved in the October seizure, naming bombs, grenades and rockets.

They accuse the two suspects of illegally importing them and say the weapons were under their control. They are also accused of having falsely declared the 13 containers seized at a Lagos port as building materials.

Both men pleaded not guilty to the new charges and federal high court judge Okechukwu Okeke adjourned the case to Tuesday.

The case has drawn international attention because it may constitute a violation of UN sanctions against Iran over its nuclear programme.

Iran has said the weapons were intended for Gambia and were part of an agreement between that country and Tehran. Gambia has denied it was the intended recipient.

Both Gambia and Senegal have cut ties with Iran over the shipment, with Dakar raising concerns that the weapons could end up in the hands of rebels in the country’s south.

Prosecutors did not provide reasons on Monday for why the charges were amended, but Aghajani’s lawyer accused them of seeking to delay the suspects’ bail hearing.

“They are just ambushing us to make sure that the bail application does not proceed,” Chris Uche said in court.

The trial of the two men had begun on February 16, but was adjourned two days later when the defence asked for a bail hearing.

While the bail hearing was not conducted on Monday, the judge ruled that the accused be transferred from the custody of the secret police to normal prison, with the defence arguing lawyers have not had proper access to their clients.

Nigeria has reported the seizure to the UN Security Council, which has approved four sets of sanctions against Iran over its nuclear programme. The sanctions include a ban on arms sales.

A UN panel of experts on sanctions on Iran was in Nigeria earlier this year to investigate the weapons shipment.

Reuters: Iran has arrested dozens of spies, including several...

Reuters: The White House on Sunday dismissed calls for...