AFP: The UN atomic watchdog opens a week-long meeting Monday, with the United States and its western allies looking to pass a resolution against Syria over its alleged illicit nuclear activity. 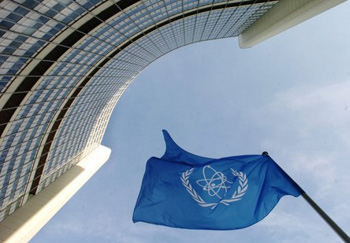 VIENNA (AFP) — The UN atomic watchdog opens a week-long meeting Monday, with the United States and its western allies looking to pass a resolution against Syria over its alleged illicit nuclear activity.

The traditional June session of the International Atomic Energy Agency’s 35-member board of governors has a heavy agenda, ranging from the upcoming two-year budget to the nuclear disaster in Japan.

But it will once again be the long-running investigations into illicit nuclear programmes in both Iran and Syria that will be the main focus of attention.

While Iran has tended to be the dominant issue at board meetings in the past, Syria looks set to take the hot seat this time round after IAEA chief Yukiya Amano stated unequivocally for the first time his conviction that a remote desert site that was flattened by Israeli bombs in September 2007 was “very likely” to have been an undeclared covert nuclear reactor.

The IAEA has been investigating the allegations for three years now, but Syria has so far refused to allow UN inspectors access to locations, data or individuals who could throw some light on the matter.

Amano’s unprecedented remarks are aimed at turning up the heat on Syria which is increasingly frustrating the IAEA with its point-blank refusal to cooperate.

The United States, in particular, has seized on his comments as an opportunity to find Syria in “non-compliance” with its international obligations and refer it to the UN Security Council in New York.

Damascus has always insisted that the site, known as Dair Alzour, was a non-nuclear military installation but it has provided no evidence so far to back this up.

Aside from a one-off visit in June 2008, Syria has refused to allow IAEA inspectors access.

Western diplomats believe there is sufficient support on the 35-member board for the resolution to be passed, although it would be “naive” to expect it to be carried unanimously, a number of them said.

A corresponding resolution looks certain to win western backing, but diplomats believe it would “naive” to expect unanimous support from the 35-member board.

Iran, too, will be in the spotlight after Amano, in his latest report, complained that the Islamic republic is continuing to stockpile low-enriched uranium, in defiance of multiple UN sanctions, and refusing to answer allegations of possible military dimensions to its contested nuclear programme.

Iran responded at the end of last month, but diplomats who said they have seen the six-page reply said it contained nothing substantively new and, in the view of one diplomat, only confirmed that Tehran is “unwilling to change course from its policy of non-cooperation.”

Sunday Times: Claims of an Iranian plot to manipulate...