AP: Iran is lagging on equipping a bunker with centrifuges that will enrich uranium closer to weapons-grade but plans to boost output by using more machines than originally planned, diplomats tell The Associated Press. 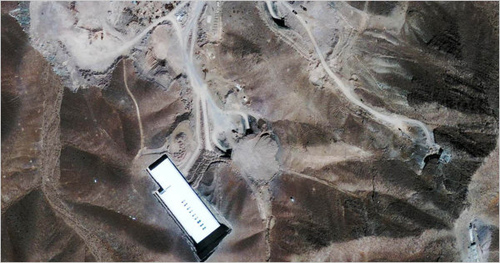 VIENNA (AP) — Iran is lagging on equipping a bunker with centrifuges that will enrich uranium closer to weapons-grade but plans to boost output by using more machines than originally planned, diplomats tell The Associated Press.

The diplomats say Iranian officials recently told the International Atomic Energy Agency half of the approximately 3,000 centrifuges to be installed at the underground Fordow site will churn out uranium enriched to near 20 percent.

The rest, they said, will produce less sensitive low-enriched material at around 3.5 percent. Iran’s higher-grade enrichment efforts are of particular concern because material at 20 percent enrichment can be turned into fissile warhead material much more quickly than that at 3.5 percent.

The diplomats said no centrifuges had been installed by July 23, the last time that IAEA experts inspected the site, indicating that Tehran was behind on plans to set up the machines by the end of July. Still, the diplomats said, preparations were well under way, with most electrical wiring, pipe work and other preliminary installations completed.

The reason for the delay was unclear. One of two diplomats who discussed confidential information on condition of anonymity suggested it could reflect temporary technical problems with expanding production of higher-enriched material.

He said that to his knowledge, the Iranians also planned to install only present-generation centrifuges currently in use elsewhere instead of more efficient centrifuges they have been developing — another sign that the program may be experiencing short-term technical difficulties.

While Iran insists that it does not seek nuclear arms and is enriching only to make reactor fuel, the United States and other nations worry that Tehran could turn its enrichment program toward making weapons-grade material.

“Enrichment from natural uranium to 20 percent is the most time-consuming and resource-intensive step in making the highly enriched uranium required for a nuclear weapon,” British Foreign Secretary William Hague wrote recently in Britain’s Guardian newspaper. “And when enough 20 percent enriched uranium is accumulated at the underground facility at Qom, it would take only two or three months of additional work to convert this into weapons grade material.”

Beside expanding its low-enrichment program in recent years, Iran has been producing higher-enriched uranium for over a year and is now using 328 centrifuges at its facility in the central city of Natanz for that purpose.

It originally announced that it planned to move all 20-percent production to Fordow and triple output — which would have meant that about 1,000 centrifuges would have been harnessed to make uranium purified to near 20 percent.

Based on the information provided by the diplomats, however, Iran now wants to use 1,500 centrifuges for that purpose, adding to international concerns about the process.

The Islamic Republic disclosed Fordow’s existence two years ago, shortly before Western intelligence services were to go public with the secret site.

Tehran refuses to cease enrichment despite U.N. Security Council sanctions. Also of international concern are indications it might have experimented with components of a nuclear weapons program — something Tehran denies.

After initially cooperating with an IAEA probe of intelligence-based allegations of secret nuclear weapons work, Iran stopped answering questions on the issue about three years ago, saying it considers the investigation closed.

AP: A Chinese businessman has been indicted on charges...