A Year After Iran Earthquake, Survivors Still Live Without Shelter 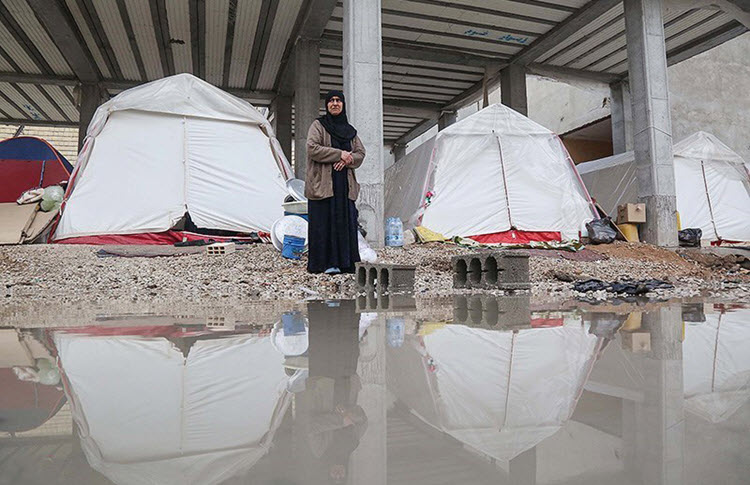 London, 23 Nov – According to an article in the Iran Human Rights Monitor, the earthquake that shook Iran’s western provinces, damaging 10 cities and 1,930 villages, destroying more than 100,000 housing units, killing more than 600 and injuring thousands more, is more than a year past, and conditions are becoming even more difficult for the homeless survivors, as the authorities continue to fail to providing aide.

Worst hit was the cities of Qasr-e Shirin, Sarpol-e Zahab and Salas-e Babajani. According to the local governor, in Kermanshah’s Dalahu county some villages had been completely destroyed.

Shocking reports have been broadcast by Iranian state-run media that show many people still don’t have suitable living conditions — many are forced to take shelter in cemeteries.

A young woman who is living under such conditions, cried as she said, “I am sick and tired of this life. Twice, I attempted to commit suicide to get rid of this life. I wish I could die and be relieved of so much pain. I cannot do anything. I am sick, myself. This child is sick, too. His treatment costs 150,000 toumans a day and I swear to God, I don’t have it.”

Many living in the cemetery suffer numerous illnesses. Mir Ahmad Cemetery dwellers say that the authorities do not care about them. One woman exclaimed that she has to ‘share her life with the dead’! She is 60 years old, and has undergone open-heart surgery since the earthquake. Now, she says, “I am sleeping here in the cemetery with the dead. But they do not allow even this much to us. Now, they say, ‘You must leave here.’ They say, ‘We want to raze here with a bulldozer and build Ahmad-bin-Es’haq market!’ There’s not even a drop of warm water so that we can bathe. We have received no aide from the government. Nothing!”

Such is the catastrophic nature of the living conditions, that some of the residents have reportedly resorted to selling their kidneys so have the money to to rebuild their homes.

Sarpol-e Zahab’s City Council Chairman gave an interview to ILNA news agency, in which he accuses Hassan Rouhani’s administration of inaction and says he considers this the reason why some citizens are selling their kidneys. He says, “The mental situation of the citizens is very troubling. Hygiene and sanitation are very inadequate, and the municipality hasn’t yet given us any money to do something. I wish the Ministry of Interior would say what services they’ve provided for a city like Sarpol-e Zahab.”

The government has not followed-through on its promises. As recently as November 7th, State-run ICANA news agency reported that the teams assigned to help the people have left them alone. Contractors who were employed to rebuild the stricken areas have abandoned their projects. Banks will not grant loans to the victims of earthquake. Some of the victims have to live in tents in the freezing cold weather.

Sarpol-e Zahab’s City Council Chairman said that, “On arrival, many of the agencies which came to the area, put up banners in the city saying that they will stand together with the earthquake victims until the end. Unfortunately, many agencies didn’t stay in the area and declared that they want to leave.”

State-run Tasnim news agency cited Parviz Fattah, head of the Relief Committee, on January 14th, as saying that the government has not granted the loans that it had promised to earthquake victims.

Many villages in Sarpol-e Zahab do not have drinking water. As well, some 80 percent of the city’s infrastructures have been damaged or destroyed. The people have removed rubble at their own expense, paying 2 million toumans to rent mechanical shovels, as the municipality has not provided any services, although the Housing Foundation was supposed to do this job. It has announced that it cannot do so.

Reports say that a mere 20 percent of the populace live in their own homes, but would prefer to live in trailers because of repeated aftershocks.

When some people are prepared to sell their kidneys to reconstruct their houses, the situation of women and children in such conditions seems unimaginable.

AFP: Iran is stepping up its support for Syrian...