Reuters: North Korea has intensified its cooperation with Iran this year and supplied it with a computer program that could help the Islamic Republic build nuclear weapons, a German newspaper reported on Wednesday, citing western intelligence sources. 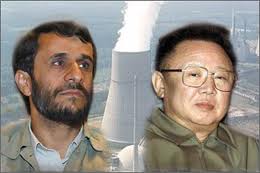 BERLIN (Reuters) – North Korea has intensified its cooperation with Iran this year and supplied it with a computer program that could help the Islamic Republic build nuclear weapons, a German newspaper reported on Wednesday, citing western intelligence sources.

The Sueddeutsche Zeitung said North Korea had in the spring delivered software, originally developed in the United States, that could simulate neutron flows.

Such calculations, linked to identifying a chain reaction, are vital in the construction of reactors and also in the development of nuclear explosives.

With the help of the program, Iran could gain important knowledge of how to construct nuclear weapons, reported the newspaper which quoted no individual source.

If confirmed, it could add to Western suspicions about Iran’s disputed nuclear activities and its links with North Korea, a secretive Asian state whose pursuit of nuclear weapons worries the world.

A confidential U.N. report earlier this year said North Korea and Iran appeared to have been regularly exchanging ballistic missile technology in violation of U.N. sanctions.

Iran rejects Western accusations it is seeking to develop atomic arms but its refusal to halt sensitive work has drawn gradually tightening U.N. and Western sanctions since 2006.

The Sueddeutsche said the program, called Monte Carlo N-Particle Extended, or MCNPX 2.6.0., was used widely for civilian purposes but is subject to strict export controls because it can also be used to develop atomic weapons.

It is unclear how North Korea got hold of the software.

The deal could be part of a comprehensive cooperation between the two states for which Iran has paid more than $100 million, said the Sueddeutsche.

The paper also said a delegation from North Korea travelled to Iran in February to train 20 Defense Ministry employees of the defense ministry in the software.

The U.N. nuclear watchdog has voiced growing concern in the last year about possible military links to Tehran’s nuclear program, saying it has received new information adding to those concerns.

For several years, the IAEA has been investigating Western intelligence reports indicating Iran has coordinated efforts to process uranium, test explosives at high altitude and revamp a ballistic missile cone so it could take a atom warhead.

Iran rejects the allegations as forged and baseless.

CNN: Iran's response to the international community's offer of...

Iran says it will not discuss suspending uranium enrichment

AFP: Iran on Saturday reiterated that it will not...