AFP: The EU on Wednesday named Iran’s elite Al-Quds force, five Syrian generals and the military intelligence network in Damascus on a new list of those sanctioned for their role in repression the UN says has killed 2,200 people. 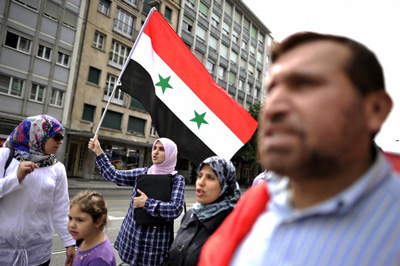 BRUSSELS (AFP) — The EU on Wednesday named Iran’s elite Al-Quds force, five Syrian generals and the military intelligence network in Damascus on a new list of those sanctioned for their role in repression the UN says has killed 2,200 people.

The much-feared wing of the Iranian Islamic Revolutionary Guard Corps was listed for having provided “technical assistance, equipment and support to the Syrian security services to repress civilian protest movements,” the European Union’s Official Journal showed.

Generals Rafiq Shahadah, Jami Jami, Nawful al-Hussein, Muhammed Zamrini, Ghassan Khalil were listed as having been “directly involved in repression and violence against the civilian population in Damascus.”

Commander of the army’s 4th armoured division, which is accused of playing a central role in suppressing protests, Maher was also singled out by European nations and the United States who pressed earlier Wednesday for new sanctions at the United Nations in New York.

Moves to apply an embargo on trading in Syrian crude oil — as much as 95 percent of which goes to EU importers — were meanwhile the subject of talks on Tuesday between the French government and oil giant Total.

Britain has expressed reservations about the effectiveness of such a ban, which could also be mirrored by sanctions on Syria’s banking and telecoms sectors.

A diplomatic source has also warned that an oil embargo — worth up to one third of the Syrian government’s income — may not have the desired effect, as China may simply step in to fill the gap.

US President Barack Obama and the leaders of Britain, France, Germany and Spain last week called publicly for Assad to quit power, but China and Russia lead opponents of moves at the UN.

Syrian dissidents on Tuesday founded a “national council,” in what appeared to be an echo of opposition tactics in Libya.

Reuters: Iran will not agree to suspend uranium enrichment...

A glance at new sanctions imposed on Iran

AP: The Obama administration announced a new set of...