Iran is said to signal nuclear cooperation by slowing expansion

Bloomberg: Iran has signaled a willingness to halt the expansion of nuclear work at the center of its decade-long dispute with world powers, according to diplomats familiar with the investigation into the atomic program. The Persian Gulf nation also slowed construction of a reactor at Arak.
Bloomberg 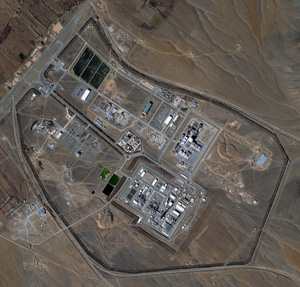 Iran has signaled a willingness to halt the expansion of nuclear work at the center of its decade-long dispute with world powers, according to diplomats familiar with the investigation into the atomic program.

Iran stopped installing machinery to boost production at its uranium-enrichment facility even as the stockpile of its most sensitive nuclear material grew to a record, United Nations nuclear monitors reported. The Persian Gulf nation also slowed construction of a reactor at Arak.

Work on putting in place the advanced centrifuges, which separate uranium isotopes at supersonic speeds, was halted shortly after Iranian President Hassan Rouhani took office, according to three senior diplomats who declined to be named because the information is not yet public. The construction slowdown at Arak makes Iranian estimates they could begin testing next year seem very optimistic, they said.

Today’s report follows a deal struck between the Vienna-based agency and Iran this week that gives investigators broader access to facilities in the Persian Gulf country. While Iran insists it won’t give up enriching uranium, negotiators told world powers last week it’s willing to compromise on the level and scope of that activity.

“The framework for cooperation marks an important step forward,” International Atomic Energy Agency monitors said in a 16-page restricted report seen by Bloomberg News. “The agency and Iran agreed to cooperate further with respect to verification activities to be undertaken by the agency to resolve all present and past issues.”
Uranium Stockpile

While the agency still wants to investigate what happened at Iran’s Parchin military complex, where Iran allegedly conducted nuclear weapons tests a decade ago, the diplomats said it was important to win a first-step agreement to improve understanding about what is currently happening in the country. Iran says its nuclear program is for peaceful uses.

Iran’s stockpile of uranium enriched to 20 percent rose to 196 kilograms (432 pounds) from 185.8 kilograms reported in September, the IAEA document said. While Iran has enriched 410 kilograms of 20 percent uranium in total, it has converted nearly half of that into metal, rendering it more difficult to further purify it to weapons grade.

About 175 kilograms of 20 percent-enriched uranium, or 630 kilograms of low-enriched uranium, if further purified, could yield the quantity of weapons-grade uranium needed to produce a bomb, according to the London-based Verification Research, Training and Information Center, a non-governmental observer to the IAEA that’s funded by European governments.
French Objections

The IAEA said that while work at Iran’s Arak heavy-water reactor didn’t stop, “no major components, such as the control room equipment, the refueling machine and reactor cooling pumps, had been installed.” French objections to the reactor’s construction helped derail an initial agreement between Iran and world powers last week in Geneva.

The amount of uranium enriched to 5 percent rose to 10,357 kilograms from 9,704 kilograms reported in September, according to the report. Iran left unchanged the number of advanced, so-called P2 centrifuges that are installed, according to the IAEA, which added that the 1,008 machines that separate uranium isotopes at supersonic speeds are not in operation.

AP: Iran's president has underscored his moderate policies and...