Key US Senator vows to keep fighting Obama on Iran 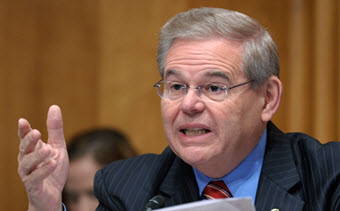 Washington, 23 Mar – A key United States Senate Democrat drew a stark contrast with the Obama administration over its diplomatic engagement with Iran on Tuesday, in a sign of lingering tensions in some corners of the party.

In remarks at the annual AIPAC policy conference, Sen. Bob Menendez (D-N.J.) forcefully denounced the international nuclear accord reached with Iran last year, which President Obama has described as a pillar of his legacy, The Hill reported.

Menendez was one of four Senate Democrats who voted unsuccessfully to kill the agreement last autumn, and made clear on Tuesday that he will continue to be a thorn in the administration’s side on the issue.

“So long as I have a voice and a vote, I will not yield to those who wish to break my resolve on stopping Iran’s illicit nuclear program and on preserving the unshakable bond between Israel and the United States,” Menendez, the former top Democrat on the Senate Foreign Relations, said.

“We can never allow Iran to threaten Israel or the region ever,” he added. “I will continue to stand with you … no matter what political powers I have to take on, even if they are in my own party.”

The nuclear deal, which was implemented earlier this year, sets limits on Tehran’s ability to build a nuclear weapon in exchange for rolling back international sanctions.

Menendez did not hold back from his criticisms on Tuesday, claiming that three missile tests Iran has conducted in recent months are proof the agreement has no teeth.

The agreement “has freed Iran to test the administration’s blind commitment to legacy,” Menendez said. “But my friends, legacy is not a policy and hope is not a national security strategy and there is too much at stake to confuse the two.”

Menendez has repeatedly called for new sanctions legislation to serve as a backstop in case Iran breaks its obligations under the agreement.

“Now we’re only a short time into this process, and already I know we need new legislation to fill the space around the [nuclear deal] that has not been addressed,” he added.

US tells banks to guard against Iranian activity

Reuters: Iran's rial plunged against the U.S. dollar in...