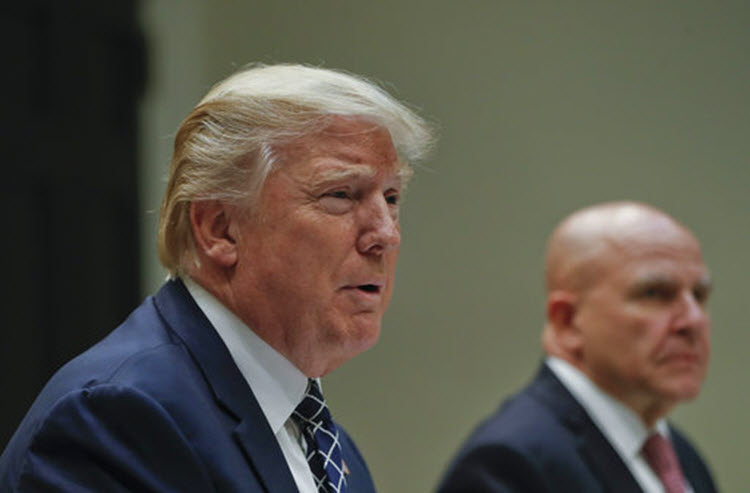 London, 20 Jul – Donald Trump wanted to declare Iran as noncompliant with the terms of the 2015 nuclear deal but was talked out of it by national security aides shortly ahead of the midnight deadline, according to administration officials.

Trump agreed to drop the issue of Iranian breaches to the international agreement, after taking advice from Secretary of State Rex Tillerson, Defense Secretary Jim Mattis, and national security adviser H.R. McMaster, but only for a few more months and only after a solution was found to distance Trump from the deal.

Rather than say that Iran had broken the deal, they chose to say that Iran was obeying the letter of the law, despite much evidence to the contrary, but violating the spirit of the deal.

This compromise allows Iran to continue enjoying nuclear sanctions relief for now but, to show that Trump is serious about confronting the Regime, new sanctions not related to nuclear activity that targeted 18 Iranian individuals and groups were announced on Tuesday.

This includes an Iranian-based company that aided the country’s drone program, a Turkey-based provider of naval equipment, and a China-based network that helped secure electronics for Tehran.

The verification of Iran’s compliance with the deal is rolling and in three months’ time, the US will have to verify the deal again. The big question is: will Trump be talked out of finding Iran non-compliant with the deal for the third time?

Many of those close to him, who spoke on the condition of anonymity, said that Trump would be unlikely to verify Iran again, especially once the official US policy on Iran has been finalised (which was the reason given for finding Iran in compliance with the deal back in April).

State Department spokesperson Heather Nauert, said: The administration is continuing to conduct a full review of U.S. policy toward Iran. During the course of this review, the United States will continue to aggressively counter Iran’s malign activities in the region.”

Whilst the outcome of the July verification may be the same result as April’s, the shift in rhetoric helps to position the Regime as in violation of the deal.

Mark Dubowitz, who runs the Foundation for Defense of Democracies and has advised the administration on Iran, said: “What that really foreshadows is once the policy review is done, we’re going to see a massive increase in pressure — not just sanctions pressure but using all instruments of American power.”

Strikes and social protests on the rise in Iran