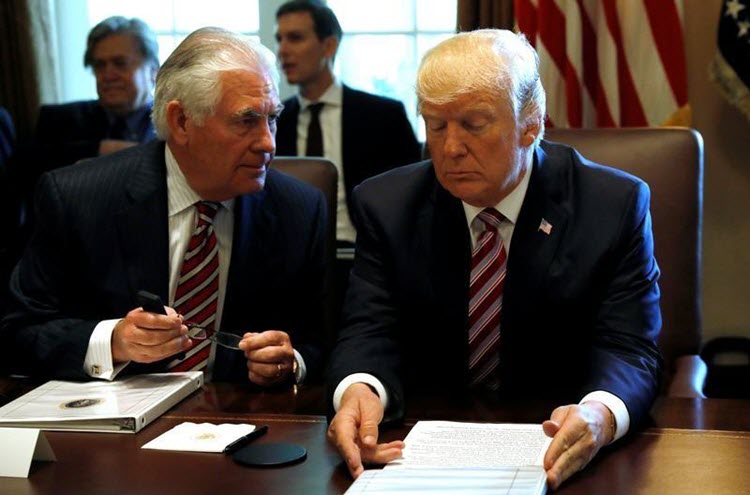 London, 4 Aug – The debate on verifying Iran’s compliance with the 2015 nuclear deal rages on behind closed doors in the White House with Donald Trump reportedly eager to find the noncompliant with the deal but being held back by his administration.

Although, the Trump administration has verified Iran as compliant on the past two reviews, they have admitted that Iran is violating the spirit of the deal with its continuous missile launches and it appears that by October, Trump will no longer tolerate Iranian belligerence.

This would be the first step towards fulfilling his campaign promise to tear up the 2015 nuclear accord signed by Barack Obama, which gave sanctions relief to Iran in exchange for a slowdown in their development of nuclear weapons.

It is unknown what impact this will have on US relations with the other signatories to the deal (Britain, France, Germany, China, and Russia) and if it could leave the US isolated. Although the European nations did recently join the US in calling on the UN to see the recent Iranian space rocket launch as a violation of a 2015 U.N. Security Council resolution which endorsed the deal.

The biggest worry is that Trump and his Secretary of State Rex Tillerson do not see eye-to-eye on this deal at all.

Last month, Trump told The Wall Street Journal that Iran would most likely be found non-compliant in October, while Tillerson told reporters at the State Department on Tuesday, that this would momentous consequences and the Us has more leverage to pressure Iran with the deal in place.

However, Mark Dubowitz, an analyst on Iran policy at the Foundation for Defense of Democracies in Washington, said that it would be an overstatement to say that the pair disagreed, citing it as a good cop/bad cop routine.

He said: “This is far better than we had in the Obama administration, when the nuclear deal was negotiated and we had then-Secretary of State John Kerry running around as the good cop, while President Obama was in the background as the even nicer cop, and it resulted in giving away too much.”

He advised that the Trump administration continue to call out Iran for its violation of the nuclear deal.

He said: “They’ve tested more advanced centrifuges that could be used to more quickly and more covertly enrich uranium for use in a nuclear weapon than they are permitted by the deal. They have exceeded their heavy-water caps, which allows them to produce the essential element for a plutonium nuclear bomb; they have exceeded their uranium enrichment caps.”

By Jubin Katiraie The outbreak of the coronavirus in Iran,...