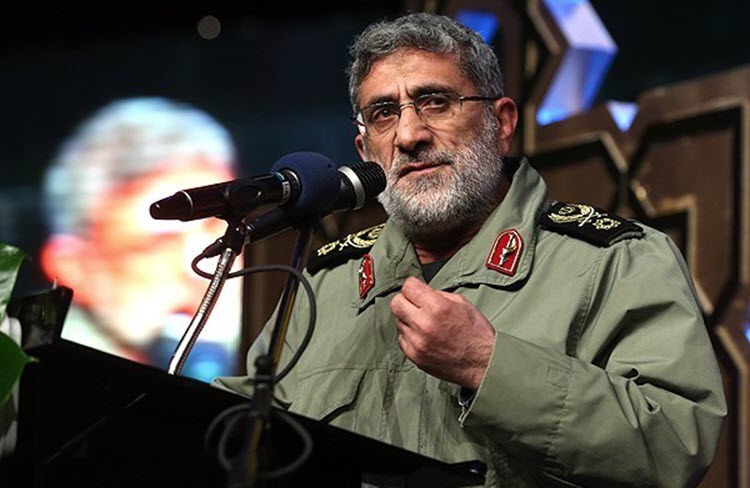 London, 4 Aug – The Iranian Regime has bragged about the murder of Americans, with a high-ranking member of their personal terror squad claiming that Iran has killed more Americans than the US has killed Iranians.

Brigadier General Esmail Qaani, deputy commander of the Qods Force, bragged about the number of Americans that the Iranian Regime has killed.

These comments should be recognised for what they are: a confession to murder. The Iranian Regime’s Qods Force murdered Americans in Iraq by smuggling explosively-formed, armour-penetrating projectiles into Iraq for the insurgents to use in their improvised explosive devices (IEDs).

The Qods Force is an elite militant branch of the Iranian Revolutionary Guards Corps (IRGC) which acts as a personal police force for the Supreme Leader of Iran, Ali Khamenei. They only answer to him, and are essentially above the law in Iran.

In the aftermath of the 2015 nuclear deal, the US paid $1.4 billion in cash to the IRGC, under the approval of Secretary of State John Kerry, as a ransom for the seven US hostages held in Iranian jails. Millions of dollars more were paid to the Iranian Regime, with the majority of that money ending up in the hands of the IRGC and its extreme Qods Force.

This essentially gave the Qods Force a budget of more than $300 million in the direct aftermath of the nuclear deal (officially known as the Joint Comprehensive Plan of Action).

These cash payments are essentially paying the salary of a man who brags about killing Americans, but there has been next to no reaction about this.

Still, Kerry and his team accept the lies of moderation from the Iranian Regime and Kerry is comfortable enough to sit by the side of Iranian foreign minister, Mohammad Javad Zarif; a man who supports the murderous Quds force and all its evil doings.

Qaani is no stranger to controversial remarks designed to hurt the US. Previously he spread the bizarre and harmful conspiracy that the 9/11 attacks in New York and Washington was an inside job by the US Government, and bragged to Iranian soldiers who fought in Syria and Iraq that the US has little power to prevent Iranian Regime from meddling in the Middle East and increasing their influence there.

These comments were highlighted by Ahmad Majidyar of the Middle East Institute in their “Iran Observed” analytical column.

Reuters: Iran would be available to hold further talks...