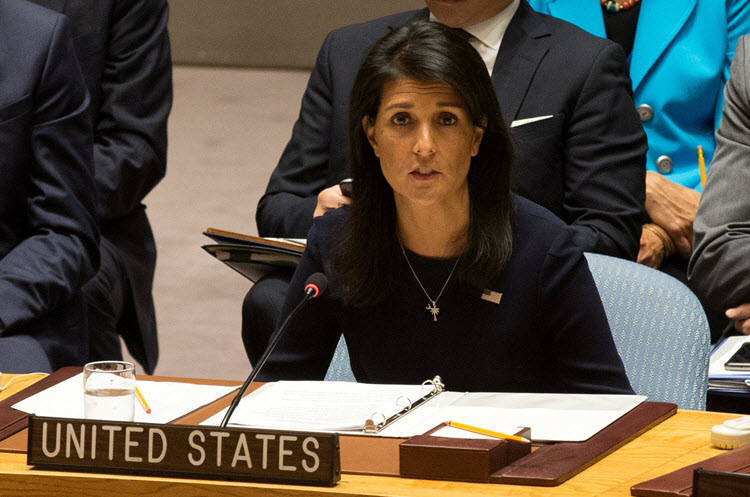 Washington, 30 Sep – Nikki Haley, the United States Ambassador to the United Nations, said “some countries” are shielding Iran from inspections by the United Nations nuclear watchdog, the International Atomic Energy Agency (IAEA). It’s believed Haley was targeting Russia, as several diplomats say that Russia has been trying to restrict the IAEA’s role by arguing it has no authority to police a broadly worded section of the deal.

These inspections are specifically mandated under the landmark 2015 Nuclear Deal with six major powers that restricted Iran’s nuclear activities in exchange for the lifting of economic sanctions. Haley said that the IAEA should widen the inspections to include military sites.

The United States is pressing for the IAEA to carry out more inspections in Iran, and Haley’s push for more inspections comes just 15 days before Trump must certify Iran’s compliance with the agreement to the US Congress.

“If the Iran nuclear deal is to have any meaning, the parties must have a common understanding of its terms. It appears that some countries are attempting to shield Iran from even more inspections. Without inspections, the Iran deal is an empty promise,” Haley stated.

Her statement is believed to be a response to IAEA Director General Yukiya Amano saying that major powers needed to clarify the disputed section of the deal that relates to technology that could be used to develop an atom bomb. The section bans “activities which could contribute to the development of a nuclear explosive device.” It lists examples, including the use of computer models that simulate a nuclear bomb, and the design of multi-point, explosive detonation systems.

Still, the provision, known as Section T, does not mention the IAEA, or specifics of how it will be verified. Russia says the IAEA has no authority over it. Western powers and the IAEA disagree.

President Donald Trump has previously called the Iran nuclear deal “an embarrassment to the United States.” He vowed to scrap last year during the US presidential campaign.

“Iranian officials have already said they will refuse to allow inspections at military sites, even though the IAEA says there must be no distinction between military and non-military sites,” Haley said.

The head of the Iranian nuclear program, Ali Akbar Salehi, accused Washington of sabotaging the agreement and called on IAEA to resist Washington’s “unacceptable demands.”

The Iranian nuclear accord was signed by Iran, along with Germany, China, the United States, France, Britain and Russia. If was meant to put Iran’s nuclear installations under strict surveillance and guarantee that Iran’s nuclear program is only used for peaceful purposes.