Iran: Labor Protests and Strikes Gain Momentum as Workers Worry About Their Livelihoods 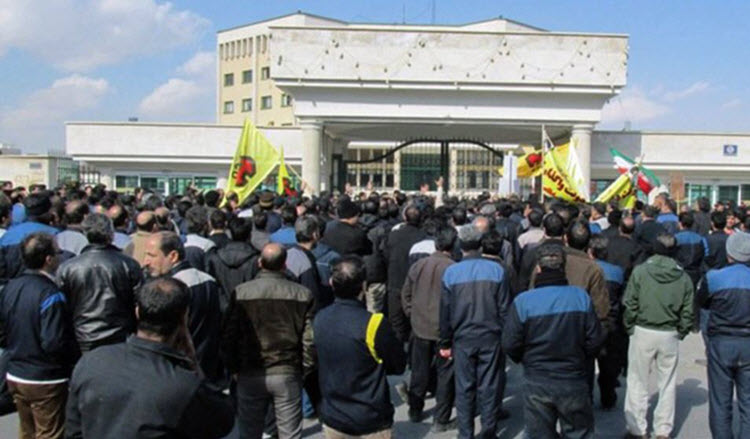 London, 30 Sep – In Iran, labor protests and strikes have increased across the country. Workers are demonstrating against layoffs and nonpayment of wages. Iran’s economy seems not to have recovered, even after economic sanctions were lifted after the signing of the 2015 nuclear deal. The Iranian peoples’ living conditions do not appear to have improved.

Iranian state is said to have attempted to halt protests by arresting workers and sentencing them to prison. Still, the increase in the number of labor protests in the past few months suggests that the Iranian labor movement is going to give more workers a voice to dissent.

Iranian workers face nonpayment of wages and mass layoffs. Their employers, of whom many are government entities or private manufacturers closely affiliated with the state, hold back paychecks, as well as lay off employees without relief packages. Iran has no feasible social security plan to assist the newly unemployed workers.

In response, the state has allegedly cracked down on the labor movement.

On 19 September, reports surfaced of antiriot police attacked workers protesting between four to six months of unpaid wages at the Heavy Equipment Production Company (HEPCO) and the Azarab Industries in Arak, Iran. Images and video clips were posted on social media and viewed by horrified Iranians. Workers were seen being attacked, as well as dozens wounded as they were being taken away, under arrest.

“I do not have bread to eat. I cannot afford to pay for my wife and children!” a HEPCO worker said in the street protest, adding, “How many miles do I have to walk in protest?”

The government, under President Hassan Rouhani, and the state, represented by the Supreme leader Ayatollah Ali Khamenei (who has the final say in Iran), are in charge of the budget and monitoring of economic prosperity. But, under their leadership, oil prices have reportedly fallen from $120 to $40 a barrel. Officials say that the Iranian Rial dropped against major foreign currencies as of September 8th.

It is said that the Islamic Revolutionary Guards Corps (IRGC) has incurred huge financial costs for the Islamic Republic of Iran’s interventions in Syria, Lebanon and Yemen. Reportedly, the IRGC shapes Iran’s economy, and instead of boosting the economy, money is being spent on war.

The somewhat privatized manufacturing sector is reported to be shutting down, with those not closing, said to be firing permanent workers, and seeking cheaper labor or temporary workers.

But now, a strong labor movement is shaping, as seen in the visible rise in the number of labor strikes, rallies, protests and sit-ins in the month of September. Many have been attributed to workers demanding the release of their trade union activists or leaders, such as Reza Shahbi of the Trade Union of the Tehran and Suburbs Vahed Bus Company.

Shahabi was arrested in 2010 and sentenced to six years in prison. He went on medical furlough after four years but was taken back to prison despite an apparent medical condition requiring regular treatment. Shahabi went on hunger strike in Rejai Shahr prison in Karaj on August 8th, to protest his lack of access to adequate medical care. His photo has been spotted in many of the worker protests. Recently, Tehran bus drivers gathered in front of the Ministry of Labor demanding Shahabi’s release, according to reports.

As Syria’s influence in Lebanon wanes, Iran moves in

New York Times: Nearly a year ago, not long...