What You Should Know About Tehran’s Latest Missile Test 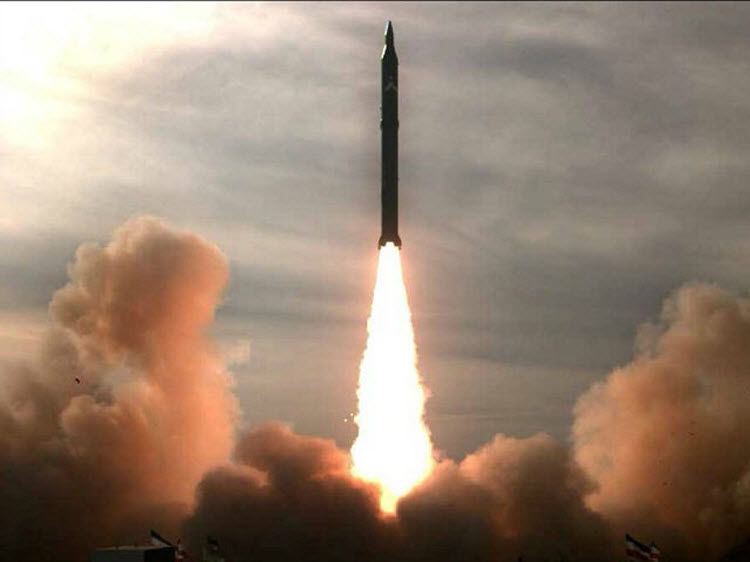 London, 3 Oct – Following the Iranian Regime’s recent unveiling of a previously unseen medium-range ballistic missile (MRBM) and their claims to have conducted a successful flight-test of the missile, many Iran hawks and missile experts jumped into action.
Behnam Ben Taleblu, a Senior Iran Analyst at Foundation for Defense of Democracies, prepared an FAQ to provide a nuanced understanding of Iran’s ballistic missile capabilities and intentions to those who don’t generally follow the development of the Iranian Regime too closely.

What’s in a name?

Taleblu wrote: “The projectile in question is a surface-to-surface missile (SSM) dubbed the “Khorramshahr,” named after a south-western Iranian city near the Iraqi border whose fabled liberation in 1982 had an outsized effect on the 1980-1988 Iran-Iraq war. Iranian elites have long referred to the Iran-Iraq War as “Defa-e Moqadas,” or “the Sacred Defense.” Every September, the Islamic Republic commemorates the commencement of that conflict by holding a week-long military parade for “Sacred Defense Week.” Tehran uses these parades to display new military hardware of admittedly questionable effectiveness. It was during the 2017 parade that the Khorramshahr missile was first publicly unveiled.”

Is the Khorramshahr nuclear capable?

Taleblu wrote: “Iranian outlets claim that the Khorramshahr is a single-stage liquid-fueled missile capable of travelling up to 2,000 kilometres while carrying a warhead that can weigh up to 1,800 kilograms…[which], according to guidelines established by the Missile Technology Control Regime (MTCR), [would be] enough to classify it as a “nuclear capable” ballistic missile.”
However, Taleblu is sceptical of these claims and believe that the Regime is trying to trick the rest of the world into thinking they are more capable than they actually are.
He wrote: “Based on publicly available images of the Khorramshahr, a single large conical warhead appears married to the missile’s body. Although Iranian outlets claim to have developed multiple independently targetable re-entry vehicles (MIRVs), it is much more likely that the Iranian press is hyperbolizing their growing ability to equip missiles with sub-munition payloads with which to shower targets. Other Western research institutions, like the Center for Strategic & International Studies, appear to agree.”

When did we first learn of the Khorramshahr?

Taleblu wrote that the earliest reports of an Iranian ballistic missile called the Khorramshahr came in September 2016. Then in January 2017, Iran tested a missile of the same name which failed its test flight and exploded after 630 miles (1,010 km).

It is worth noting that this failed test was cited American, British, French, German, and Israeli delegates to the United Nations as being a clear violation of the Security Council Resolution which cements the 2015 nuclear deal

Where did the Khorramshahr come from?

Taleblu wrote: “There are debates in the open-source community as to the origins of the Khorramshahr MRBM, and if it could be seen as the newest measure of ongoing missile cooperation between Pyongyang and Tehran, [as backed up by sources from the US, Israel, and Germany].”

He continued: “Although not enough information is available on the Khorramshahr missile yet, if additional North Korean connections to come to light, they would be yet another dangerous marker of missile ties between the two rogue regimes.”

Why does Tehran feel the need to publicly flex its muscles?

Taleblu wrote that there are both military (making sure weapons actually work) and political (bolstering deterrence and coercion) benefits to the Regime’s decision to publically test their missiles.

Taleblu wrote: “Iranian missile tests continue to constitute a mutually intelligible signal to two different audiences – regime elites and the domestic population, as well as adversaries abroad. To the domestic audience, a missile test is a signal of commitment and resolve to continue pursuing the revolutionary cause no matter the cost. And to international audiences, it is a signal of defiance against rules established by a world order it rejects. All three of these incentives to test missiles have been accentuated by the JCPOA nuclear deal implementation-era.”

Taleblu believes that the “test” was not merely a hit at Donald Trump and Emmanuel Macron for citing the Iranian missile programme as a severe problem before the United Nations last month. He thinks the true message was meant for a domestic audience.

He said: “According to the new Director of National Intelligence (DNI), Iran now has “the largest inventory of ballistic missiles in the Middle East.” This is an assessment the previous DNI shared as well.”

Why would Tehran lie?

Taleblu wrote: “If the test had been real and occurred in September, it would indicate a marked escalation by Tehran. Since being put “on notice” by the Drumpf administration in February, Tehran has not flight-tested a nuclear-capable MRBM with a functioning reentry vehicle. Feigning a missile test by re-upping an old video that inhibits making a battle damage assessment is one way to signal resolve to your domestic audience without crossing redlines or tripwires as established by your foreign adversary. However, the U.S. should not rest assured. This situation will almost certainly not be permanent, and Tehran has a demonstrated track record of testing red lines to see if they have faded and turned pink.”

How many missiles has Iran launched since inking the JCPOA?

Taleblu wrote: “Since agreeing to the JCPOA in July 2015 until the Drumpf administration’s “on notice” warning, Tehran has launched up to 14 ballistic missiles. This number is inclusive of all Persian and English language reporting (be it failed or successful) on launches of non-nuclear and nuclear-capable short, medium, and intermediate range SSMs with a ballistic trajectory and SLVs. It is thus inclusive of the January 2017 Khorramshahr test. Since then, Tehran has launched two Hormuz-2 anti-ship ballistic missiles (ASBMs) at its own barges in the Persian Gulf, fired six SRBMs into the Syrian theatre, and once tested another SLV. Using the same criterion (which ignores the ASBMs) brings the number of launches by Tehran from July 2015 – to present up to 21. Had the Khorramshahr been actually tested by Tehran in September, then that number would now be 22.”