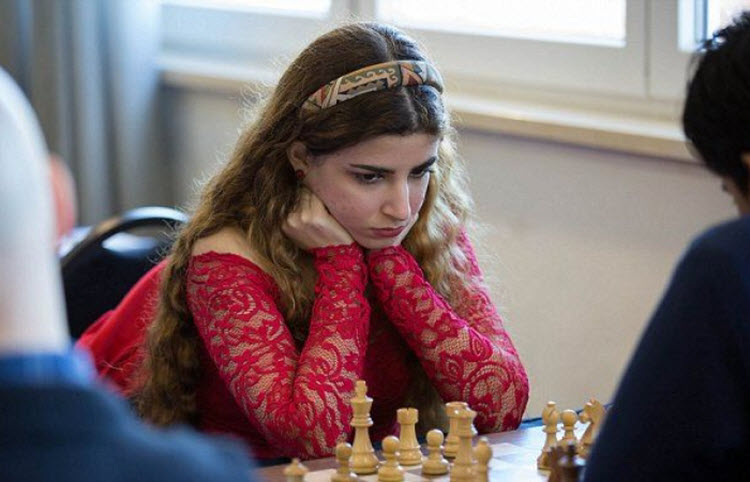 London, 3 Oct – When the Iranian Regime banned a female player from their national chess team for what they call “bad hijab”, the last thing they would have expected is that she would have joined the US team instead.

Dorsa Derakhshani refused to wear the traditional headscarf (known as the hijab), which all Iranian women have been forced to wear in public since the Iranian Regime took power in 1979, at a competition in Gibraltar in February and as a result the Iranian Regime dropped her from the team.

On Monday, the semi-official ISNA news agency reported that Derakhshani, who won the titles of Woman Grandmaster and International Master in 2016, has joined the US national chess team instead.

Another semi-official Iranian news agency, Mehr, spoke to the president of Iran’s chess federation, Mehrdad Pahlevanzadeh, who confirmed that Derakhshani had changed her national federation to the US, something that is apparently not unusual for chess players, and claimed that she was not a member of Iran’s national chess team.

Pahlevanzadeh said: “She played for Iran only one time in 2014.”

According to ISNA, Derakhshani left Tehran for Barcelona in 2015 after receiving an invitation from a chess club that supported her studies.

Shohreh Bayat, the general secretary of Iran’s chess federation, said that Derakhshani is now studying in the US, according to Tasnim, another semi-official Iranian news agency.

Bayat said: “Derakhshani has not become a member of the U.S. national chess team, she just changed her federation to the United States.”

A Bad Break Up

However, if this is true, then why was Derakhshani playing for Iran in February?

Well, it turns out that she wasn’t even playing for Iran when they decided to ban her for refusing to wear the hijab.

She’d left them, was playing for another country, and then they tell her she’s banned from playing for them because she wasn’t wearing her hijab. It’s much like when someone dumps you, you see them on a date with someone else, and you decide to tell them it’s really over now.

At the Gibraltar competition, Derakhshani’s brother Borna was actually playing for Iran and was subsequently banned as well for playing against Israeli grandmaster Alexander Huzman, after a computer paired them up.

The reason given is that Iran, which does not recognise the country of Israel and supports anti-Israeli militant groups like Hamas and Hezbollah, does not allow its people to compete against Israeli athletes.

German embassy in Iran pelted with eggs over murder

Wall Street Journal: The Obama administration on Monday will...