A New Plan to Pull Away From the Iran Nuclear Deal 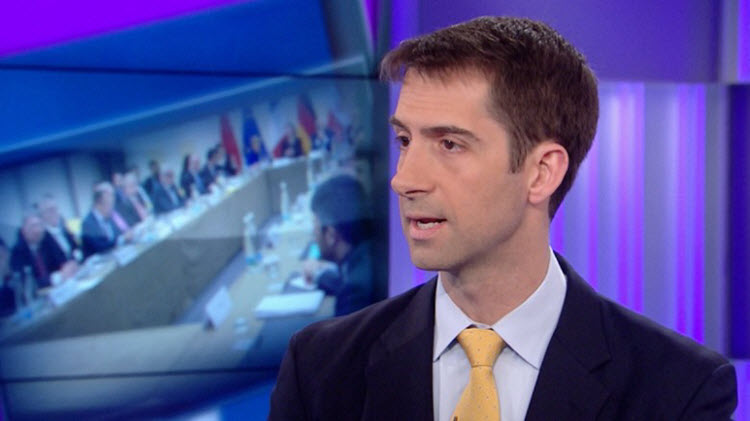 London, 4 Oct – A Republican senator from Arkansas has prepared a way for Donald Trump to distance the US from the failed 2015 nuclear agreement, without new sanctions, military action, or the Iranian Regime’s immediate withdrawal from the deal.

Tom Cotton said that Trump should decertify Iran’s compliance at the October 15 deadline and allow Congress to approve a list of demands, which Trump could then submit for the approval of European allies, who are part of the deal and reluctant to leave it altogether.

On Tuesday, October 3, during an event held hosted by the Council on Foreign Relations, Cotton, a member of the Armed Services Committee, said: “The Congress and president should lay out how the deal should change and the consequences for Iran.

The world needs to know we are serious, we are willing to walk away, and we are willing to impose sanctions and a lot more than that. And they’ll know that when the president declines to certify the deal, and not before.”

Under US law, the president is required to certify to Congress Iran’s compliance with the nuclear deal every 90 days. So far in 2017, Trump has certified them twice despite major evidence to the contrary and his own statements against the deal while on the campaign trail.

Following the July deadline, Trump told the Wall Street Journal that he had expected not to find Iran in compliance until his aides talked him out of it.

However, Cotton notes that decertifying Iran’s compliance is not the same thing as pulling out of the deal and that Congress could seek to revise rather than reverse the deal.

The 2015 deal, which was fully implemented in 2016, lifted sanctions on the Iranian Regime in exchange for curbs on their nuclear programme.

Critics, including Cotton, say that it fails to take into account the other threats posed by Iran, such as their meddling in the Middle Eastern countries like Syria, Iraq and Yemen, their support of terrorism, and their ballistic missile programme.

Cotton said: “Their missile program alone warns us that they continue to seek nuclear weapons.”

He also noted that whilst diplomacy should be given time to work, sanctions and military intervention must remain on the table.

He even suggested the use of “calibrated strikes” against Iran if the Regime will not change its behaviour.

He said: “If we are forced to take action, the United States has the ability to totally destroy Iran’s nuclear infrastructure.”

He also believed that the US would be able to completely contain any retaliation from the Regime, be it increased transfer of weapons or activation of terrorist cells.

He said: “Better to have no deal at all than one that compromises our security, emboldens Iran and encourages nuclear proliferation across the Middle East.”

Ahmadinejad warns EU not to pursue sanctions on Iran