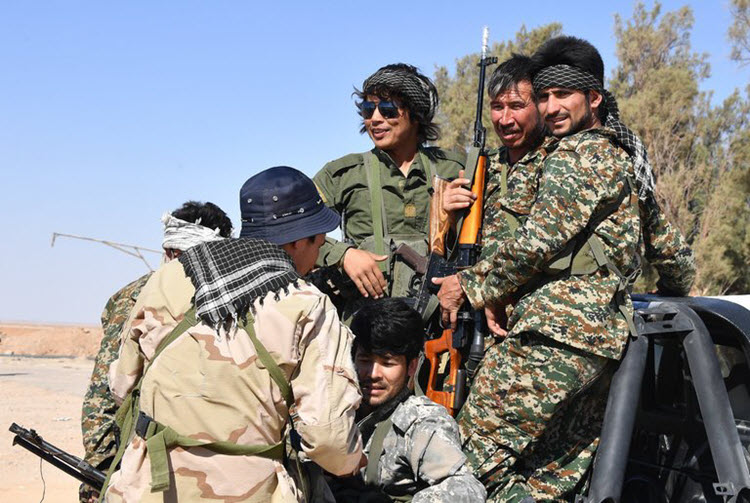 London, 4 Oct – Lawmakers in Afghanistan have demanded that their government force the Iranian Regime to stop using Afghan refugees as militants in the Syrian Civil War.

Mohammad Asif Seddiqi, the deputy head of the Senate, said: “[The government] should seriously pursue this matter to compel Iran to not use Afghans as a tool and send them to war in other countries.”

The Iranian Regime has recruited thousands of Afghan refugees to fight on their behalf, to prop up the Bashar Assad dictatorship by promising that they and their families will receive citizenship, accommodation and money.

There are currently 1.7 million Afghans living in Iran and around 40% are there illegally, so to them this may seem preferable to deportation or living in poverty.

The Iranian Regime has been recruiting Afghan children, some as young as 14, in direct violation of international law, which considers the recruitment of children for active service to be a war crime, and the UN charter on children’s rights.

In a statement released on October 1, Sarah Leah Whitson, Middle East director at Human Rights Watch (HRW), said: “Iran should immediately end the recruitment of child soldiers and bring back any Afghan children it has sent to fight in Syria.”

Ajmal Hodmand, president of the Association for Afghanistan’s Lawmakers, said that the Iranian Regime’s recruitment of Afghan refugees, especially teenagers, was a clear violation of international law but explained that he also blamed the Afghan government for its inaction.

He said: “Among the government’s responsibilities is to protect and defend its nationals at home and abroad, and to stop any country or organization from using its nationals, especially children, as soldiers.”

He said that Afghanistan must engage in serious talks with the Iranian Regime in order to stop this recruitment and if that proves unsuccessful, then they must raise the matter with the UN.

Others have also implored the Afghan government to improve conditions for the ordinary people so that they are not forced to flee to places like Iran.

While Abdul Hafeez Mansoor, MP, said: “We’ve only condemned it and done nothing to stop it. The government needs to act [and] should create jobs so people don’t flee and become tools for others.”

He said that MPs are worried that Iran’s recruitment of Afghan nationals will only worsen sectarian strife in Afghanistan and encourage Sunni terrorist groups in Afghanistan, like the Taliban, Al-Qaeda and Daesh, to attack Afghan Shiites in retaliation.

Ahmad Shekib Mustaghni, the chief Foreign Ministry spokesman, confirmed on October 2, that “some Afghan refugees… are encouraged (by host countries, including Iran) to take part in activities that are against international principles,” but have been told by Iran specifically that the refugees are volunteering to fight.

It may be wise for the Afghan government not to take the Regime at their word on this and to still work for the freedom and safety of their people.

The Local: The Iraqi embassy in Stockholm has admitted...