Tillerson: Trump Will Have Many Options on Iran Deal 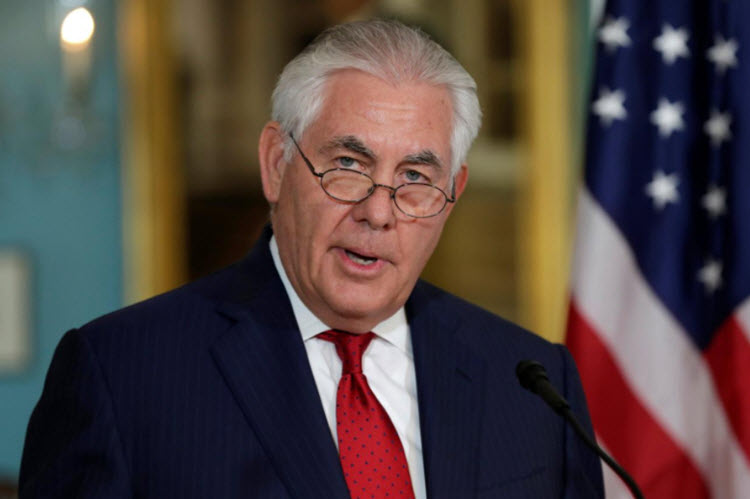 London, 5 Oct – US Secretary of State Rex Tillerson said that Donald Trump would be presented with several options for the future of the Iran nuclear deal ahead of the October 15 certification deadline.

When Tillerson made this announcement, on Wednesday October 4, he did not reveal any details about the options that would be presented to Trump and declined to answer whether he shared the view that Defense Secretary James Mattis shared with Congress on Tuesday that Iran was “fundamentally” in compliance with the nuclear deal and Trump should stick to the deal.

Tillerson said: “We’ll have a recommendation for the president. We’re going to give him a couple of options of how to move forward to advance the important policy toward Iran.”

Supporters of the 2015 deal, which Trump has called “the worst deal ever” and “an embarrassment”, fear that pulling out could alienate US allies in Europe and be detrimental to the Middle East.

However, one could well argue that the Iranian Regime’s interference in countries like Iraq, Syria, and Yemen is already detrimental to the Middle East and that hopefully European nations would rather support the US than a terrorist regime.

In September, a senior US official said that Trump would not be recertifying Iran as compliant with the deal. Trump’s previous rhetoric (on the campaign trail, in front of the UN) suggests that as well but he has already done it twice this year, supposedly of the advice of Tillerson, Mattis, and others in the administration.

Trump told journalists that he’d made up his mind last month but refused to confirm which path he was taking.

If Trump declines to certify Iran, then Congress will have 60 days to decide whether or not to reimpose nuclear sanctions.

Tillerson has been highly critical of the nuclear accord, formally known as the Joint Comprehensive Plan of Action (JCPOA), and called for changes to its terms, particularly the so-called sunset clauses that allow some restrictions on Iran’s nuclear programme to expire.

Trump’s decision with regards to the certification deadline will represent just one part of the US’s new broad policy on Iran, according to Tillerson.

Second Anniversary of Major Iran Uprising: The Time Is Now for World Powers To Speak Up

November 2021 marks the second anniversary of the major...