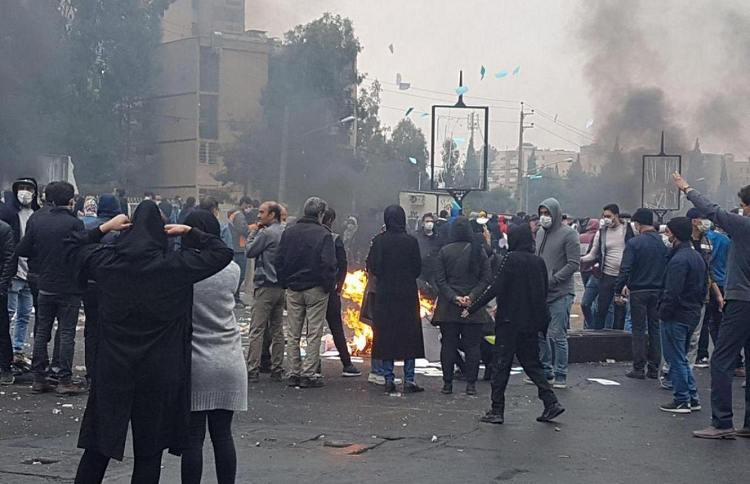 The 41-year rule of the ayatollahs has plunged Iran into a systematic corruption.

Today, not only citizens but also officials admit that the country’s economy is on the verge of collapse due to corruption, mismanagement, nepotism, embezzlement, etc. However, they are trying to escape themselves and laying blame their rivals.

For instance, the supreme leader Ali Khamenei tried to vindicate himself by saying: “Justice is necessary. Corruption and oppression must be fought. Of course, it is much difficult. Corruption is like the seven-headed dragon in myths. When you cut ahead, it keeps moving with six other heads. Its elimination is not easy. It is tough to deal with individuals who benefit from corruption, but it should be done.” (Source: Khamenei’s official website, February 8, 2018)

But Khamenei refrained from mentioning where is the head and heart of corruption. He said nothing about these heads and organs, and he did not mention who is their chief and which law has institutionalized this scope of  corruption under a “religious state.”

However, the Iranian people know that Khamenei, as the most powerful and wealthy person in Iran, is both the head and heart of the dragon.

In March 2018, former president Mahmoud Ahmadinejad wrote that the money held in foundations controlled by Supreme Leader Ali Khamenei amounts to $156 billion. In 2019, the U.S. embassy in Baghdad wrote in a Facebook post, “The possessions of the current supreme leader Ali Khamenei alone are estimated at $200 billion, while many people languish in poverty because of the dire economic situation in Iran after 40 years of rule by the mullahs.”

However, the Iranian government attempts to dupe citizens through publicity stunts of countering corruption. In this context, since a while ago, the ayatollahs began to divert public opinion from the main corrupt figures by creating hollow bluster about jailing and trying unimportant individuals.

“In recent months, corruption trials have taken place with series of million-dollar bribes from several judicial officials to senior managers of the Central Bank of Iran (CBI),” wrote the state-run daily Setareh Sobh on August 5. This daily pointed to a €6-billion case of the Petrochemical Trading Company, explaining, “These cases indicate that the corruption has been active in the country and billion-dollar profits of exporting goods have yet to return to the treasury.”

For many years, the Iranian people have experienced that the judiciary system hands out harsh sentences to ordinary people while easily closing its eyes on corruption cases of high-ranking officials. Many years ago, playwright and poet Bertolt Brecht described such a condition as such: “Bank robbery is an initiative of amateurs. True professionals establish a bank.”

This is exactly what is happening in Iran. Judicial executives turn a blind eye on Khamenei’s multi-billion-dollar empire while at the same time amputating the fingers of poor people who had to steal to feed their families. Security forces suppress and detain protesting workers who have not received their low salaries for months while government-linked employers freely plunder their employees and workers.

“According to officials, the unlimited powers of some managers in senior organizational positions, lack of oversight and transparency in the government agencies’ banking accounts, expanded rent-seeking, and lack of a counter-corruption department in governmental offices have paved the way for corruption. The Ministry of Intelligence and Security (MOIS), which is aware of what is happening behind corruption cases, has frequently-issued warnings over the risk of spreading corruption in the country,” Setareh Sobh daily added.

However, the authorities’ main concern is not about the country’s economic conditions or wasting national resources. They are deeply concerned about the revelation of corruption cases leading to the draining of the state’s “social capital.”

“This is our belief that according to intelligence details, researches, and scientific-intelligence probes, no issue like the corruption phenomenon has caused the erosion of the state’s social capital,” Jamaran website quoted deputy minister of intelligence for combating economic corruption on August 4.

The ayatollahs, their showcase pieces like Foreign Minister Mohammad Javad Zarif, and their lobbies in the U.S. constantly endeavor to convince their audience that Iran’s economy has been torn due to foreign economic pressures, particularly U.S. sanctions. However, the fact is, government mismanagement is the first and foremost reason for Iran’s economic collapse.

“The situation in our country will not improve, and our (economic) problems will not be solved, because the main reason for our problems is internal. Even if it rains gold, if we do not enjoy meritocracy and the rule of law, nothing will be solved,” he said in an interview with Fars news agency affiliated to the IRGC on December 9, 2013.

Several years later, Khamenei also admitted that the country’s economic problems were the result of internal mismanagement by the government and not just because of the U.S. pressure, according to Daily News on August 13, 2018.

“We must realize that there is a significant relationship between national security and combating economic corruption. We consider economic corruption the most important internal proponent threatening our economic security,” the deputy of the MOIS added in the interview with Jamaran.

In recent years, economic issues were the main reason that sparked nationwide protests. In December 2017, hundreds of fed-up people took to the streets of Mashhad city, northeastern Iran, expressed their anger over rising egg prices. They chanted the slogan, “The supreme leader lives like a lord, the people begging for money.” The protest immediately spread across the country and continued for several days, shaking the ground under the ayatollahs’ feet.

In November 2019, hundreds of thousands of people flooded into the streets in over 190 cities across Iran after the government declared a sudden hike in the price of gasoline. The government managed to quell the upheaval through excessive violence: security forces killed more than 1,500 protesters and detained at least 12,000 others in the span of a few days.

The November protests was a landmark in the Islamic Republic’s history, which revealed that contrary to officials’ claims, neither “reformists” nor “principlists” enjoy a social base in Iran’s society. In this respect, authorities are yet concerned about the second wave of protests in the upcoming months. They describe it as potentially being stronger than the November 2019 uprising and likely to end the theocratic rule of Iran.