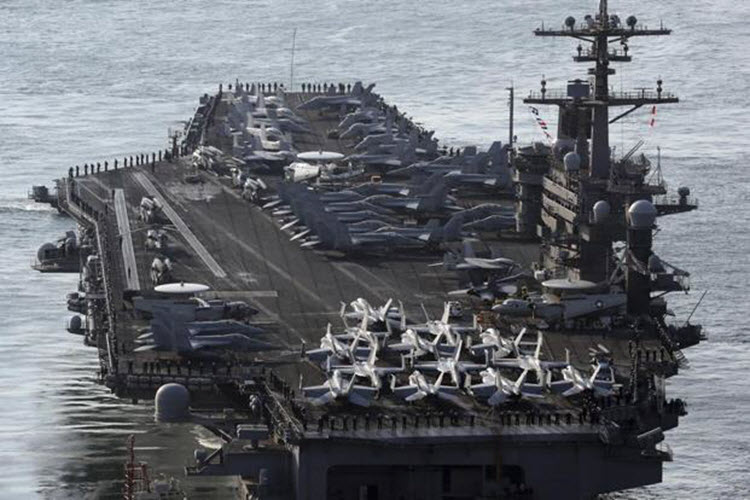 London, 26 Oct – The United States Navy now has three aircraft carriers and their assorted missile-carrying vessels deployed to the western Pacific Ocean for the first time in a decade, as tensions with rogue nuclear states North Korea and Iran continue to rise.

On Wednesday October 25, the USS Nimitz and its strike group entered the Western Pacific region, fresh from deployment in the Middle East, according to a press release from the Navy.

This deployment, which the US Navy says is part of a previously planned cycle, coincides with Donald Trump’s visit to Asia next week.

Before the USS Nimitz, the USS Theodore Roosevelt strike group, including a cruiser and three destroyers, entered the region on October 23, joining the USS Ronald Reagan, which is anchored in Busan Naval Base in South Korea.

The official US Navy statement read: “U.S. Navy Carrier Strike Groups routinely deploy to the Western Pacific and the Indian Ocean. These deployments are part of a previously planned deployment cycle and it is not uncommon for incoming and outgoing carrier strike group transit timing to overlap as one begins a deployment the other concludes.”

In response, Anthony Capaccio wrote on Bloomberg: “Still, it’s a rare occurrence to have three battle-groups in the Western Pacific at once. The last time the Navy had a similar deployment was in August 2007, when the USS John C. Stennis, USS Nimitz and USS Kitty Hawk participated in the Valiant Shield exercise, according to the service.”

It is believed that this may be part of a much larger build-up as, in addition to the aircraft carrier strike groups, the US Navy has also announced that the USS Michigan- one of four specialised naval submarines which can carry up to 66 Navy SEAL commandos and 154 Tomahawk missiles- had arrived in Busan on October 13.

It is well documented that the Iranian Regime has been working with the North Koreans on their nuclear programme in clear violation of the 2015 nuclear deal, from providing Kim Jong UN with £2 billion per year to attending nuclear missile launches.

The US is fighting back again the threats posed by the nuclear states.

Carl Higbie, a former Navy Seal, said: “There is clearly an axis between North Korea and Iran, they are helping each other. They are an extremely dangerous duo and we need to resolve this. But Kim Jong-Un and the Iranians have never seen anyone talk back to them in these terms. We will not accept appeasement of these tyrants.”