Trump Will Not Waive Iran Sanctions in May 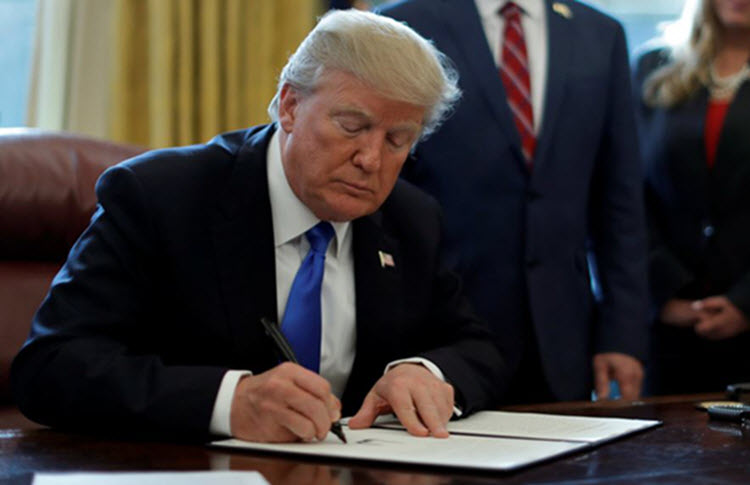 London, 12 Apr – On Wednesday, US Treasury Secretary Steven Mnuchin said that a decision by US President Donald Trump not to renew sanctions relief for Iran on May 12 would not necessarily mean the United States had withdrawn from the 2015 Iran nuclear deal, however, it’s not clear what Mnuchin meant by his comment. Still, it seems to signal that the White House administration does not believe that the agreement will necessarily collapse if Trump chooses not to extend US sanctions relief to Iran.

The Joint Comprehensive Plan of Action (JCPOA) signed in 2015 by Iran and six major powers — Britain, China, France, Germany, Russia and the United States — agreed that Iran would limit its nuclear program in return for relief from the economic sanctions that financially cripple the country.

Trump delivered an ultimatum to Britain, France and Germany, on January 12th, demanding that they “fix the terrible flaws of the Iran nuclear deal” or he will issued new “waivers” to suspend the US sanctions relief on Iran. would not be extended. It is not clear how quickly the waivers would go into effect.

Trump’s comments on January 12th are viewed by European officials as a threat to kill the deal. In an attempt to salvage the nuclear deal, they have been in negotiations with the Trump administration.

Mnuchin said at a Congressional hearing that the Trump administration was in talks with allies and would “not do anything abruptly.” He told the US House of Representatives Appropriations Committee, “If the president decides not to sign that (waiver), it doesn’t mean we’re necessarily pulling out of the deal. What it means is that the primary and secondary sanctions will go back in place.”

Two sources familiar with the matter said that in Washington on Wednesday, the political directors of Britain, France and Germany met with Brian Hook, the State Department’s director of policy planning, and discussed the future of the JCPOA.

While Tehran’s response to a Trump decision to refuse to renew the sanctions waivers, Iran can legally argue that the United States violated its commitments to ease sanctions even as they kept their nuclear commitment, as verified by international inspectors.

Whatever Mnuchin may say, US nuclear experts say that if Trump does not waive the sanctions in May, it effectively kills the nuclear deal.

According to European diplomats, even if US allies decide to remain in the agreement, Western companies would most likely withdraw from Iran due to the threat of US sanctions.

France and Gulf allies in war games amid Iran tensions

Reuters: Forces from France, the United Arab Emirates and...