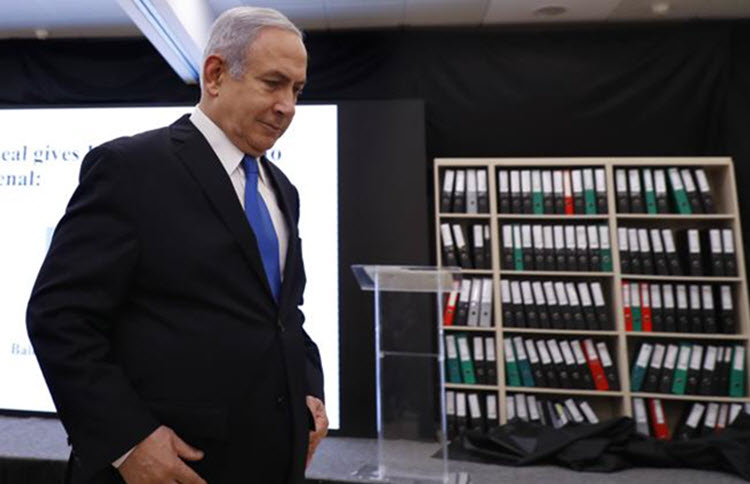 London, 2 May – At the beginning of the week, Prime Minister of Israel Benjamin Netanyahu was in Tel Aviv to deliver a speech about Iran’s former nuclear weapons program.

He presented evidence to show that before the 2015 Iran nuclear deal was negotiated, Iran has been working on nuclear weapons – not pursuing the civilian nuclear power that it declared.

Although the Israeli Prime Minister was not accusing Iran of still working on the program, he said that it shows the nuclear deal is based on lies and that Iran cannot be trusted.

Netanyahu presented the data in a slideshow and the information was obtained by Israeli intelligence. It has managed to get hold of a large number of files from a run-down warehouse in the Iranian capital. The files apparently provided irrefutable proof that Iran has a “comprehensive” nuclear program that had the aim of designing, constructing and testing nuclear weapons.

The revelations from Israel come just weeks before United States President Donald Trump is due to make a decision about whether he will continue to waiver sanctions and about exiting the nuclear deal. Trump warned the signatories of the deal that the United States would exit if he was not entirely satisfied with the deal. He called on the other parties to remove the loopholes and sunset provisions, to strengthen and reinforce inspection processes and to address peripheral issues such as Iran’s belligerence in the Middle East and its ballistic missile program.

Trump has been an outspoken opponent of the deal, as has Israel. To Israel, Iran is an existential threat and it has been speaking out against the deal long before it was agreed. Israel has previously said that the Iran nuclear deal does not curb the nuclear threat, rather it guarantees Iran is on a slow path to being nuclear armed.

The Trump administration’s new Secretary of State Mike Pompeo said in a statement that he has looked at the files provided by Israel and has concluded that the deal “was not constructed on a foundation of good faith or transparency”. He added that the deal was built on “Iran’s lies”.

This is something that is common with Iran – it lies and carries out negotiations based on deception. Even when presented with evidence, the Iranian regime continues to lie and deny allegations.

Israel’s ambassador to the United States said that Iran has clearly and deliberately hid and withheld information about its activities in the years preceding the nuclear deal. He expressed his doubts about whether Iran will be able to develop nuclear weapons in the future.

Although the evidence presented by the Israeli Prime Minister does not mean that Iran has been actively working on a nuclear weapon since the deal was negotiated, it does show that Iran is a very untrustworthy player.

Some of the European leaders have taken the opportunity in the wake of Netanyahu’s speech to reiterate the importance of the deal. But the deal must be strengthened. Iran is already exploiting the loopholes and it is benefiting from an inspections process that is far too lenient.

US Congress to Obama: Stand tough on Iran

AFP: An overwhelming majority of US lawmakers Tuesday demanded President...