How to Precipitate a Collapse of the Iranian Dictatorship? 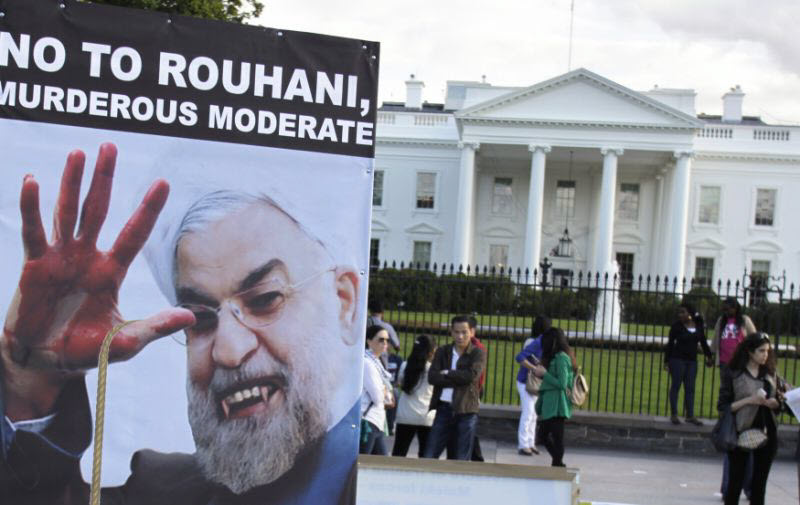 London, 15 May – The UK, France, and Germany all claim that they can continue with the Iran nuclear deal following Donald Trump’s withdrawal last week, but can they really?

According to Sandeep Gopalan on The Hill, past evidence suggests that would be “virtually impossible”; especially once Trump’s new sanctions are put into place.

On May 8, Trump pulled the US out of the 2015 Iranian nuclear deal, otherwise known as the Joint Comprehensive Plan of Action (JCPOA), saying that it has failed to “prevent an Iranian nuclear bomb”.

Shortly after the announcement, he tweeted: “If we do nothing … the world’s leading state sponsor of terror will be on the cusp of acquiring the world’s most dangerous weapons.”

In the two weeks prior to Trump’s announcement, European leaders had gone into overdrive to convince Trump to remain in, with French President Emmanuel Macron, German Chancellor Angela Merkel, and British Foreign Secretary Boris Johnson all visiting the US to speak on this issue.

But why would they want to keep a deal in place that was so dangerous to national security? The answer is simple, money.

The last time that sanctions were imposed on Iran, trade between EU countries and the rogue state dropped from €27 billion to €6 billion.

And Trump knows that allowing the EU to continue this trade will undermine his goals. He wants to bring Iran back to the negotiating table to fix their other issues, i.e. military action in the Middle East, human rights abuses, and ballistic missile programme. Iran won’t do this if it is still able to access trade from every other country.

Therefore, the US will get tough on enforcing sanctions against Iran and target any company that trades with them. They’ve already fined Chinese company ZTE $890 million for trading with Iran during the last period of sanctions and now the company is facing another $300 million penalty.

Other companies that the US has targeted for Iranian sanctions violations include:

So, why would any company risk these sort of fines? Even if the governments of their countries supported them, the shareholders of the companies would not.

Businesses are there to make money, but these deals would destroy the company’s reputation and hit them in the bank balance. On top of that, executives could face prosecution and jail.

Gopalan wrote: “Trump should do a new Iran nuclear deal, minus Iran. This should be a deal with the United Kingdom, European Union, and allies in Asia such as India to collectively reimpose sanctions. Achieving such a deal would be a bigger victory than merely scrapping the JCPOA. If Trump can persuade China that its own commercial interests require disengagement from Iran, he might precipitate a collapse of the Iranian dictatorship through an economic chokehold. That would bring peace to the Iranian people and the region.”

AFP: The UN General Assembly on Friday passed a...