World Should Listen to Maryam Rajavi 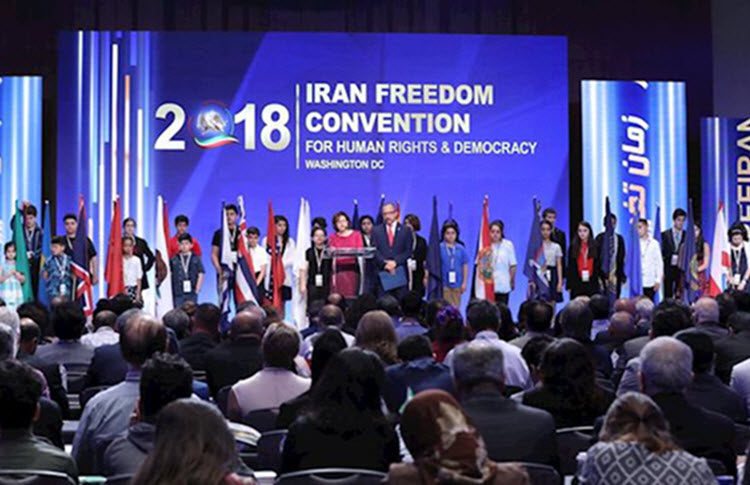 London, 15 May – On May 5, Iranian-American community leaders gathered in Washington DC for a convention to promote democracy and human rights in Iran.

The convention featured a speech from the President of the National Council of Resistance of Iran (NCRI) Maryam Rajavi, which most believe was a preview of the message that she will deliver at the Iran Freedom gathering on June 30 in front of 100,000 supporters of a Free Iran.

In the speech, Rajavi reminded the convention of several predictions that the Iranian Resistance made about the Iran nuclear deal back in 2015, including that the mullahs would use the money that they got to fund terrorism and malign interference in other states.

Rajavi said: “The experience of the past three years has confirmed that the mullahs took advantage of the concessions in the [Iran nuclear deal] to suppress the people of Iran and massacre the people of Syria.”

While its troubling that these predictions have come to pass, there is now hope that the rest of the world will listen to the Iranian Resistance.

When Donald Trump withdrew from the Iran deal, he brought these issues front and centre and the media should pay close attention.

Those close to Trump, including national security advisor John Bolton and personal lawyer Rudy Guliani, have supported the Iranian Resistance in the past, even speaking at the Iran Freedom rallies. They will not allow this to slip by unnoticed.

One thing is clear, the US will no longer appease Iran. The White House has rejected the idea of focusing on just one of Iran’s malign issues and is instead tackling all of them from human rights to terrorism.

There is simply no point in focusing on a singular issue; we have already seen that policies like that only worsen the Iranian-made crises facing the Middle East and the world at large.

US officials, including Defense Secretary James Mattis, are beginning to echo the NCRI’s concerns, with Mattis repeatedly pointing out Iranian fingerprints at the centre of global crises.

Of course, this doesn’t just bring the US in line with the Iranian Resistance, but also with the Iranian people. Ordinary Iranians first took to the streets to demand regime change back in December, crying “death to the dictator”, and they haven’t backed down despite a violent crackdown by the mullahs.

This is yet another correct prediction by the Resistance, as Rajavi promised a year full of uprisings”, back in March, “leading to a complete change of government in Iran”.

At the Washington convention, Rajavi reminded Western leaders that the Iranian people want support for their uprising to overthrow the Iranian dictatorship. As little as two years ago, this would have been unlikely, but now it seems very possible indeed.

One of the key ways to do this would be for the international community to support the Resistance and listen to Rajavi. After all, she’s been correct so far.