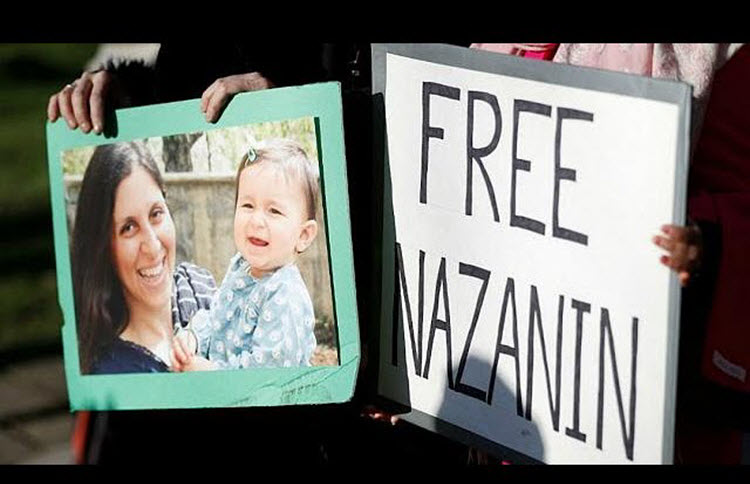 London, 15 May – A British charity worker who was wrongfully imprisoned in Iran on espionage charges is facing fresh charges from the mullahs, according to her husband.

Nazanin Zaghari-Ratcliffe, who was arrested two years ago after taking her baby daughter Gabriella to visit family in Iran, will be returning to court in the next week or two to face resurrected charges of spreading propaganda against the ruling system; a charge usually levied by Iran when they don’t have anything concrete to charge a person with.

Richard Ratcliffe believes that Iran is using his wife as a political “bargaining chip” because the case is being opened just as Foreign Secretary Boris Johnson prepares to meet for talks about Iran and the future of the nuclear pact with his French and German counterparts and EU high representative Federica Mogherini in Brussels.

Zaghari-Ratcliffe, 39, called her husband on May 14 at 5.30 am to let him know about the new charges and it is clear that the false imprisonment and the treatment from the Iranian authorities is negatively affecting her.

Ratcliffe reported that she said: “I have no clue why they have started all this nonsense again. They know Boris is coming. Please take me out of this, please. My parents have had enough. I want my daughter back. She needs both of us. So tell the world. Enough of this nonsense.”

These charges were brought up after members of her family visited prosecutors for an update on her case.

In a statement released by the #FreeNazanin campaign, Zaghari-Ratcliffe spoke of how deeply she misses her daughter, who is now nearly four.

She said: “Sometimes when I come back from the visit with Gabriella, after saying goodbye to her, I feel like I cannot live without her, I want to go back and hold her… After the news of a new court case again, yesterday was one of those days. I kept thinking, how did I survive without her for 26 months?”

Zaghari-Ratcliffe, who works for the Thompson-Reuters Foundation, is currently serving a five-year jail term over ridiculous allegations that she was plotting to overthrow the Iranian ruling system.

Iranian government had no evidence to support this claim, but imprisoned the Londoner anyway. This shows that Ratcliffe is right; Zaghari-Ratcliffe is being used as a political pawn.

Iranian judiciary already tried to use Zaghari-Ratcliffe to extract £400 million and other favours from the British government in late 2017. Now, they are trying to use her to keep the UK (and by extension the EU) in the deeply flawed nuclear deal.

Toughen up on Tehran