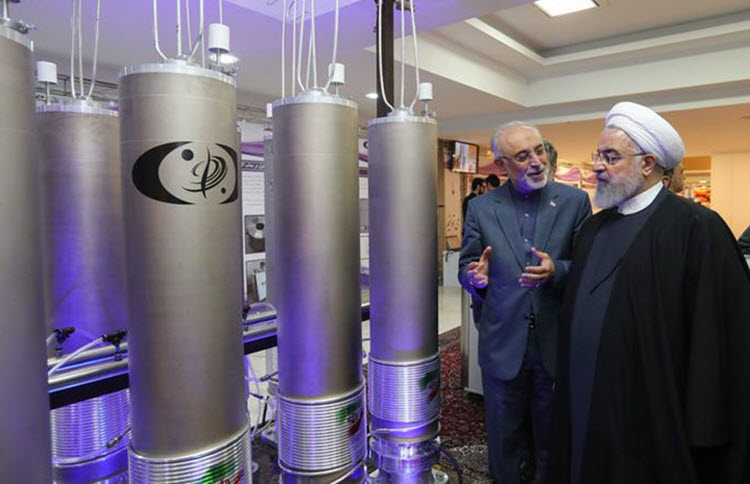 A representative for Iran’s Atomic Energy Organization said on Wednesday that Tehran would speed up its enrichment of uranium on Thursday after a deadline they gave to European countries to protect them from US sanctions is due to expire, according to the IRIB news agency.

The organization’s spokesman Behrouz Kamalvandi said: “The deadline of the Atomic Energy Organization for passing the production of enriched uranium from the 300-kilogram border will end tomorrow. With the end of this deadline, the speed of enrichment will speed up.”

This will violate the nuclear deal and several powers have warned Iran against enriching uranium past the maximum 3.67% enshrined in the deal, fearing that this takes Iran one step closer to a nuclear weapon. (When the nuclear deal was agreed in 2015, experts believed Iran needed between several weeks and three months to have enough material for a bomb.)

Tom Plant, the director of proliferation and nuclear policy at London’s Royal United Services Institute for Defense and Security Studies, said: “[These] reserves of material [could] in the future support a more rapid push to the higher levels of enrichment that are suitable for weapons use.”

The Secretary of Iran’s Supreme National Security Council said on Tuesday that Iran would take further steps on July 7 to decrease its compliance with commitments under its nuclear deal with world powers, otherwise known as the Joint Comprehensive Plan of Acton (JCPOA).

The US sanctions were imposed by Donald Trump after he took the US out of the nuclear deal last year, citing Iranian noncompliance and saying that the deal failed to address Iran’s other malign behaviour.

Corey Hinderstein, a vice president at the Washington-based Nuclear Threat Initiative who once led the U.S. Energy Department’s Iran task force, said: “I worry about the snowball effect. Iran now takes a step which puts Europe and the other members of the deal in an even tougher position.”

Ian Stewart, a professor at King’s College London who runs its antiproliferation studies program called Project Alpha, said: “It’s not clear at which point the EU will have to back away from a noncompliant Iran.”

Tensions have been growing between Iran and the US for a while now, recently ramping up after Tehran ime shot down a US drone over international waters and attacked several tankers near the Strait of Hormuz.

Iran is currently suffering from a number of dangerous...