Iran and the missile defense imperative

Wall Street Journal: U.S. intelligence now sees Tehran developing intercontinental missiles by 2015. If we continue our current strategy, we will not be able to counter the threat.

U.S. intelligence now sees Tehran developing intercontinental missiles by 2015. If we continue our current strategy, we will not be able to counter the threat. 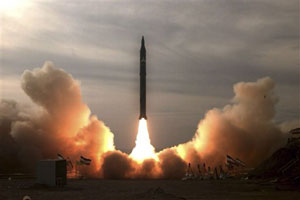 In a June 27 interview on ABC’s “This Week,” CIA Director Leon Panetta warned that it could be a mere two years before Iran is able to threaten other states with nuclear warheads mounted on ballistic missiles. When discussing the new U.S. sanctions against Iran recently signed into law by President Barack Obama, Mr. Panetta said, “Will it deter them from their ambitions with regards to nuclear capability? Probably not.”

Three months ago the Defense Intelligence Agency reported that by 2015 Iran, with help from North Korea or Russia, could field an intercontinental ballistic missile (ICBM) capable of reaching the East Coast of the United States. This is by no means far-fetched. In early 2009, the Iranians successfully launched their first homegrown satellite into orbit. In March of that same year, Gen. Michael Maples, then-director of the Defense Intelligence Agency, told a Senate panel that Iran’s successful satellite launch “shows progress in mastering the technology needed to produce ICBMs.” Earlier this year Iran successfully orbited a second satellite with an ICBM-class ballistic missile.

Gen. Maples is right. If you can launch a satellite into orbit you are very close to being able to hit a target half way around the world. That’s why the Soviet launch of Sputnik so shocked the U.S. intelligence community in 1957. When a country is the most active state sponsor of terrorism, and its leaders routinely endorse slogans like “Death to Israel” and “Death to America,” we should take it seriously when they pursue the capabilities to make their dreams a reality.

A December 2009 missile launch proved Iran has already obtained the ability to reach Israel. Given President Mahmoud Ahmadinejad’s and other Iranian leaders’ millenarian fanaticism, it would be most imprudent to rely on nuclear deterrence alone to protect us. If Tehran were to achieve a nuclear missile capability, it could hold American cities hostage—unless, that is, the U.S. builds a robust and comprehensive ballistic missile defense.

Our current missile shield will have 26 ground-based interceptors based in Alaska, in addition to the four based in California, by the end of this year. These are part of an initial defense architecture designed to protect against missiles launched from North Korea. These interceptors could provide some protection from missiles launched from Iran toward our East Coast, but the margin for error would be unacceptably small.

Moreover, once Tehran can build one or two functioning ICBMs, it can build many more. As Defense Secretary Robert Gates testified before a Senate panel on June 17, “If Iran were actually to launch a missile attack on Europe, it wouldn’t be just one or two missiles, or a handful.” We need a defensive system that has full coverage, especially of the U.S. homeland, and that can add interceptors easily to cope with an Iranian ICBM buildup.

That’s why the Bush administration proposed building a missile-defense site in Europe in addition to those already in place in Alaska and California. This would provide cities on the East Coast, our troops abroad, and our allies in Europe added protection from an Iranian missile attack.

But last September the Obama administration scrapped the Bush plan and replaced it with one called the Phased Adaptive Approach, which is less capable of dealing with threats against U.S. territory. This plan entails deploying mobile systems to Europe to intercept short-range missiles. The Defense Department would gradually upgrade these systems, but the plan offers no added protection for the U.S. until 2020. That’s almost certainly too little too late.

Our vulnerabilities don’t stop there. If Iran were to launch a nuclear-armed missile from a ship near one of our coasts—say a primitive SCUD from a fishing boat—we would have very little warning and no protection. Defending the homeland against this threat would require a substantial deployment in and near the U.S. of the type of mobile systems that the administration plans to deploy in Europe.

Further, if the Iranians were to detonate even a primitive nuclear warhead over the United States, it could send out an electromagnetic pulse (EMP) destroying the electric grid and electrical systems across a wide swath of U.S. territory. Iranian military writings show the mullahs recognize the potential of this kind of attack. Depending on where it occurred and how large the warhead was, an EMP attack could cause large-scale fatalities and unimaginable economic devastation. Defending against this kind of threat requires defensive systems that can intercept an attacking ballistic missile while it is still ascending. But the Obama administration has no specific plans to develop and deploy ascent-phase interceptors in Europe.

Given the growing Iranian threat, the Obama administration should re-evaluate its missile-defense strategy. The U.S. should deploy as many interceptors as possible in Alaska and should plan for an emergency deployment of a third site either in Europe or on the East Coast. Moreover, as Iran continues to improve its missiles, and the White House negotiates agreements to host radars and other missile-defense assets in Europe, the administration should make contingency plans for rapid deployment of mobile defenses, including ascent-phase interceptors, to protect us here at home.

Above all the Obama administration should clarify to the U.S. Senate and the Russian government that neither the new U.S.-Russian Strategic Arms Reduction Treaty nor commitments made during the negotiation process will in any way limit our ability to protect ourselves against an Iranian nuclear attack.

Mr. Woolsey is a former director of Central Intelligence and a board member at the Foundation for the Defense of Democracies, where Ms. Heinrichs, a former manager of the House Bipartisan Missile Defense Caucus, is an adjunct fellow.