RFE/RL: Even as the latest UN, U.S., and European Union sanctions against Iran create new hardships for the country’s economy, most Iranians outside the government seem to place the blame for the situation on President Mahmud Ahmadinejad’s uncompromising policies. 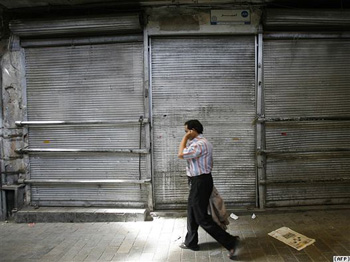 Even as the latest UN, U.S., and European Union sanctions against Iran create new hardships for the country’s economy, most Iranians outside the government seem to place the blame for the situation on President Mahmud Ahmadinejad’s uncompromising policies. At the same time, officials are trying mightily to ignore or downplay the effects of the sanctions.

Earlier, Tehran focused on demonizing the United States for isolating Iran. In recent weeks, however, Ahmadinejad’s government has added the European Union and, now, Russia to its enemies’ list, after the EU approved a new round of sanctions and Russia (and China) joined with other UN Security Council members in approving a fourth resolution of UN restrictions.

Nonetheless, Ahmadinejad and his government have been loudly stressing that the sanctions will have only a minimal effect on Iran’s economy. Ahmadinejad said in a recent speech that ties with the EU comprise just $24 billion of Iran’s “$900 billion economy.” “Maybe the Iranian nation will someday celebrate the introduction of these sanctions,” he asserted, “because we will make our economy a strong, global power completely independent of imports.”

“Nobody takes him seriously,” says Hossein, a trader in Tehran’s Grand Bazaar, when I ask him about Ahmadinejad’s statements. “You just wonder what kind of logic he and his supporters are using. It is exactly such baseless and aggressive statements that have triggered more and more sanctions against our economy.”

“Two years ago people were saying the West should treat us like a strong regional power with equal rights,” Hossein continues. “Then [U.S. President Barack] Obama tried to reach out to Ahmadinejad, but ‘the professor’ kept rejecting him and making all those stupid, aggressive statements. Now you tell me who is to blame…. I haven’t heard any other opinions in the bazaar.”

Squeezed Out By The Guards

A month ago, the Grand Bazaar was the scene of a strike to protest a proposed new income tax on traders. That action forced the government to back down for now, but Hamid, another trader there, says that in the ensuing weeks “things have gotten even worse.”

“A month ago, I also pulled down the shutters on my shop,” Hamid says, “but now I’m still sitting and watching what happens. The bazaar is open now, but business is as bad as if we were still closed.”

The strike in Tehran and other major cities coincided with the adoption of new sanctions by the UN, the United States, and the EU. Although the planned tax hike on traders was the formal reason for the protest, Hamid says it was really rooted in the perception that private business in Iran — where the economy is dominated by the state sector and by businesses tied to the Islamic Revolutionary Guards Corps (IRGC) — is undergoing hard times, “maybe regardless of sanctions.”

“Some small and medium-sized businesses are doing OK as long as they don’t come into the radius of the government’s attention as a possible source of new revenues. If you grow, though, they come and take you over using dozens of pretexts. I know one firm that produces spare parts for machinery. As soon as the owner’s income reached $400,000 a year, an IRGC front company forced him to sell it to them.”

Domestic businesses have also been hit hard by cheap imports from China. “Even our honey is ‘made in China,'” Hossein tells me. “Two hundred fifty grams of Chinese honey costs $5, while high-quality Iranian honey costs $20. Who is going to buy the Iranian honey? So they gradually close down their businesses, as was the case with a sugar factory in Hafttappeh.”

The shutdown of trade with the West can only make this situation worse. The government monopolizes big business like the energy sector and continues to gobble up any bits of the private sector that begin to show a profit.

“Maybe we need an Obama here in Iran,” Hossein concludes ruefully. “We tried and failed a year ago [in the disputed June 2009 presidential election]. God is great, but I don’t know how long the government will keep playing this thing out, or how long the people will tolerate it.”

Abbas Djavadi is an associate director of broadcasting at RFE/RL. The views expressed in this commentary — which is based on a speech presented at a conference in Istanbul organized by the German Orient-Institut and Turkey’s Bilkent University on June 5-6 — are the author’s own and do not necessarily reflect those of RFE/RL

AFP: Iran is losing influence in Iraq, US President...