After Green Movement, Iran’s conservative factions turn on each other

RFE/RL: Last year’s crackdown on Iran’s opposition Green Movement united the various factions of the country’s ruling establishment. Recently, however, there are signs of conflict among these competing groups, and Supreme Leader Ayatollah Ali Khamenei seems to be having trouble balancing among them while simultaneously favoring President Mahmud Ahmadinejad’s “militaristic-messianic” faction. 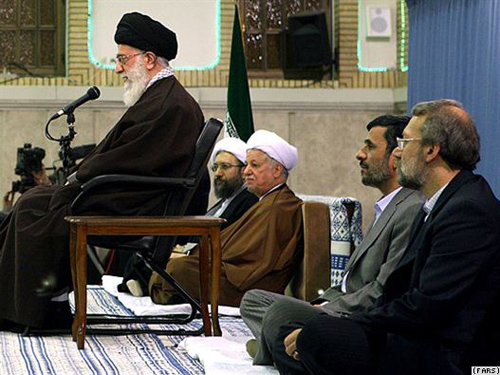 Last year’s crackdown on Iran’s opposition Green Movement united the various factions of the country’s ruling establishment. Recently, however, there are signs of conflict among these competing groups, and Supreme Leader Ayatollah Ali Khamenei seems to be having trouble balancing among them while simultaneously favoring President Mahmud Ahmadinejad’s “militaristic-messianic” faction.

Just last week, pro-Ahmadinejad lawmakers asked the justice authority to investigate remarks by two leading conservative members of parliament from the so-called pro-justice faction headed by Ahmad Tavakkoli. The deputies reportedly sharply criticized Ahmadinejad and his supporters for “distancing themselves from the clerics” and acting like “a terrorist group.”

This development comes on top of the long-running conflict between Ahmadinejad’s government and the parliament, or Majlis. Parliament is largely controlled by the so-called principlist faction, headed by speaker Ali Larijani. This conflict has de facto paralyzed cooperation between the executive and legislative branches. The government does not send its decisions to lawmakers for their confirmation, and it routinely fails to implement laws adopted by parliament.

Yet another faction — the so-called pragmatists led by former Islamic Revolutionary Guard Corps (IRGC) commander Mohsen Rezai (who ran against Ahmadinejad in last year’s disputed election) — has also been openly critical of the current government.

“All these factions are united in obeying the supreme leader — in foreign policy, the nuclear program, cracking down on the opposition, justice, security issues, and media censorship,” says Majid Mohammadi, an analyst for RFE/RL’s Radio Farda. “However, they differ — in some cases sharply — on social and economic issues such as government subsidies and the strictness of hijab,” the Islamic veil for women.

“In fact,” Mohammadi adds, “they fight about who runs the country, its oil money and its huge security apparatus, both currently controlled by Ahmadinejad and his supporters.”

Nima R. is a professor and political scientist at Tehran University who was forced to retire last year because of his political views. He says now that the Greens have been “successfully suppressed,” the insider clans have turned on Ahmadinejad’s faction, “which controls both the money and the security forces.”

None of these factions derives its legitimacy or influence from popular support. They compete for Khamenei’s favor. Despite his clear preference for Ahmadinejad, Khamenei has tried to maintain a balance among all these competing interests.

During the dispute over last year’s election and in the conflict between the Majlis and the government, the supreme leader has supported Ahmadinejad, but he fell short of giving the president his complete backing in some other, less visible instances.

Some analysts believe, however, that Khamenei may have felt forced to endorse Ahmadinejad in last year’s election because of the growing power of the IRGC. Any further consolidation of the power of Ahmadinejad’s faction could diminish both the supreme leader’s supremacy and the influence of the traditional clerics.

“The supreme leader is trying to preserve his own leadership and keep the initiative,” Nima R says. “Other groups are concerned that Iran is approaching a point where Ahmadinejad and his security forces — both the IRGC and the Basij militias, who now control the country’s economy — will make the supreme leader a puppet following their dictates.”

Many Iranians who consider themselves religious and conservative believe that Ahmadinejad has adopted a secular and confrontational (even, aggressive) course targeting not only reformists and regime opponents, but many traditional clerics and middle-class groups that have long formed the power base of the Islamic republic.

A member of the principlist faction wrote recently: “One of Mr. Ahmadinejad’s supporters said to me: ‘Since you have good relations with the grandpas and old men of the principlist group, tell them that their time expired years ago.”

Nina R. notes that the “extremely conservative” clergy remains influential, especially in the judiciary. “But with each further step consolidating the power of Ahmadinejad and the Revolutionary Guards, the mullahs fear they will be completely sidelined.”

Both Nina R. and Mohammadi agree that a military attack against Iran would serve — at least temporarily — to again unite these competing factions. “A military attack would also rally considerable parts of the population to support the defense of Iran’s sovereignty — that is, to support Ahmadinejad and the Revolutionary Guards,” Nina R. says. “This is why the Ahmadinejad government is so persistent in its confrontational, anti-Western course.”

Abbas Djavadi is an associate director of broadcasting at RFE/RL. The views expressed in this commentary are the author’s own and do not necessarily reflect those of RFE/RL