Washington Post – Editorial: Part of President Obama’s mantra about Iran has been that “all options are on the table” – meaning he will not rule out military action to stop its attempt to acquire nuclear weapons. So why does Defense Secretary Robert M. Gates keep undercutting the message? 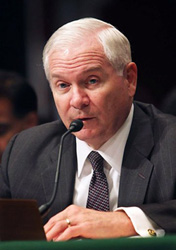 PART OF President Obama’s mantra about Iran has been that “all options are on the table” – meaning he will not rule out military action to stop its attempt to acquire nuclear weapons. President George W. Bush said the same thing; in fact, there is broad agreement among American policymakers that the threat of force must be part of the mix of pressures and incentives aimed at Tehran. So why does Defense Secretary Robert M. Gates keep undercutting the message? Twice in the past week, Mr. Gates has publicly argued against a military option – even though neither the United States nor Israel appears to be close to launching a strike.

Mr. Gates first rejected a statement by Israeli Prime Minister Binyamin Netanyahu, who said that if the United States “hopes to stop Iran’s nuclear program without resorting to military action, it will have to convince Iran that it is prepared to take such action.” That sounds like Mr. Obama’s policy; why say that “all options are on the table” unless the point is for Tehran to believe it? But Mr. Gates said: “I disagree that only a credible military threat can get Iran to take the actions that it needs to end its nuclear weapons program.” He added that while “we are prepared to do what is necessary . . . the political, economic approach we are taking is having an impact in Iran.”

In an interview with Gerald F. Seib of the Wall Street Journal this week, Mr. Gates elaborated on his point. Saying that the Iranian leadership had been “surprised by the impact of the sanctions” imposed this year, he argued that a military solution “will only . . . bring together a divided nation, it will make them absolutely committed to obtaining nuclear weapons and they will just go deeper and more covert. So I think the political-economic strategy is the one we have to continue to pursue.”

To be clear: We agree that the administration should continue to focus for now on non-military strategies such as sanctions and support for the Iranian opposition. But that does not require publicly talking down military action. Mr. Gates’s prediction of how Iranians would react to an attack is speculative, but what we do know for sure is that the last decision Iran made to curb its nuclear program, in 2003, came when the regime feared – reasonably or not – that it could be a target of the U.S. forces that had just destroyed the Iraqi army. As for the effect of the sanctions, Tehran has not shown itself ready to begin serious bargaining about its uranium enrichment.

Mr. Gates’s Pentagon has been a center of opposition to discussing military options for Iran for years. Given the potentially high costs and uncertain outcome of such a mission, that’s understandable. But by sending the message to Iran that U.S. military action is not a serious possibility, the defense establishment only makes it more likely that the United States and Israel will eventually face a terrible choice between launching an attack and accepting an Iranian bomb.

Bloomberg: Iran has restricted the availability of monthly cash...