America, Iran and a terrorist label

Reuters: Who says that the United States and Iran can’t agree on anything? The Great Satan, as Iran’s theocratic rulers call the United States, and the Islamic Republic see eye-to-eye on at least one thing, that the Iranian opposition group Mujahedin-e-Khalq (MEK) are terrorists.

– Bernd Debusmann is a Reuters columnist. The opinions expressed are his own. – 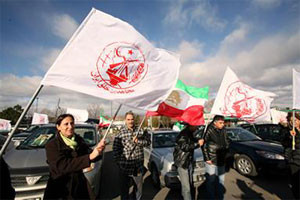 Who says that the United States and Iran can’t agree on anything? The Great Satan, as Iran’s theocratic rulers call the United States, and the Islamic Republic see eye-to-eye on at least one thing, that the Iranian opposition group Mujahedin-e-Khalq (MEK) are terrorists.

America and Iran arrived at the terrorist designation for the MEK at different times and from different angles but the convergence is bizarre, even by the complicated standards of Middle Eastern politics. The United States designated the MEK a Foreign Terrorist Organization in 1997, when the Clinton administration hoped the move would help open a dialogue with Iran. Thirteen years later, there is still no dialogue.

But the group is still on the list, despite years of legal wrangling over the designation through the U.S. legal system. Britain and the European Union took the group off their terrorist lists in 2008 and 2009 respectively after court rulings that found no evidence of terrorist actions after the MEK renounced violence in 2001.

On July 16, a federal appeals court in Washington instructed the Department of State to review the terrorist designation, in language that suggested that it should be revoked. But it gave U.S. Secretary of State Hillary Clinton two years to re-assess the label and the review mills appear to be grinding very slowly.

A group of lawmakers from both parties reminded Clinton of the court ruling this week and drew attention to a House resolution in June — it has more than 100 co-sponsors and the list is growing — that called for the MEK to be taken off the terrorist list. Doing so would not only be the right thing, the six leading sponsors said in a letter, it would also send the right message to Tehran. Translation: using the terrorist label as a carrot does not work, so it’s time to be tough.

Come January, when a new, Republican-dominated House of Representatives begins its term, Clinton and President Barack Obama are likely to come under pressure from hawkish members of congress to act tough towards Iran, further tighten economic sanctions and ensure that those already existing don’t erode.

The influential House Foreign Affairs Committee will be headed by Ileana Ros-Lehtinen, an enthusiastic MEK-backer, who said in a recent interview with Reuters correspondent Pascal Fletcher that the West must make clear it means business about implementing sanctions against Iran. “If…we convey a sense of weakness and a lack of resolve, the centrifuges (in Iran’s uranium enrichment program) keep spinning.”

Ironically, it was the MEK which gave the first detailed public account of Iran’s until-then secret nuclear projects at the cities of Natanz and Arak, in 2002. The disclosure greatly turned up the volume of the international controversy over Iran’s intentions. (Iran’s leaders firmly deny that work on nuclear bombs is underway).

Iran’s nuclear program is likely to rise close to the top of Obama’s foreign policy agenda in the second half of his mandate, particularly if there are no signs of progress in the on-again, off-again attempts to break the present stalemate. The next talks are scheduled for Dec. 5, between the so-called P5+1 (U.N. Security Council members Britain, France, Russia, China and the United States, plus Germany) and Iran.

Other than getting the United States in sync with its Western allies on their assessment of the MEK, what would taking it off the 47-strong American list of Foreign Terrorist Organizations change? In the United States, it would unfreeze frozen funds and allow the group to reopen its office and operate freely as an advocacy group.

In Iran, it would deprive the government of an all-purpose scapegoat to taint all reformists with the MEK brush. In arresting alleged members or sympathizers, Iranian authorities routinely mention that even the United States considers the group terrorist. In their letter to Clinton, the legislators argued that the U.S. designation allowed Iranian officials to “further justify their draconian punishments”.

How much support the MEK, whose leadership is based in Paris, enjoys in Iran is a matter of dispute and many experts rate it as insignificant. But there is no dispute over draconian punishments for Iranians judged to be members or sympathizers. That prompts charges of “waging war against God”, which is punishable by death.

The MEK’s appeal to the Washington court in summer was its fifth petition. It remains to be seen how long the United States. and Iran will stay on the same page on the matter.

AP: Iranian scientists have run computer simulations for a...