Washington Post – By Ted Koppel: Veteran broadcaster on how a crisis ended, but a war began. 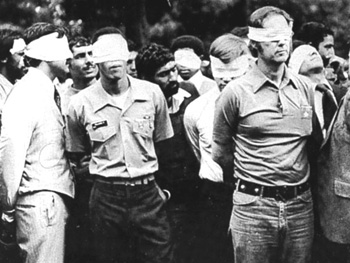 on how a crisis ended, but a war began

On Jan. 20, 1981, 52 American diplomats, intelligence officers and Marines were finally released after being held hostage for nearly 15 months at the U.S. Embassy in Tehran. Americans saw it as the end of a long national nightmare. Iranians saw it as a successful phase in what the Pentagon would come to call the Long War.

We were wrong; they were right.

On the face of it, the Iranians achieved what they wanted. President Jimmy Carter had labored with key advisers through the last night of his presidency, desperately trying to bring about the hostages’ release before Ronald Reagan was sworn in as the 40th president. The Iranians, though, were determined to humiliate our 39th president and were not about to free the captives on Carter’s watch.

As the television networks began their Inauguration Day coverage, the expected moment of release became the theme. TV screens were split to accommodate parallel images from Washington and Tehran. Just outside the Iranian capital, camera crews were taken to Mehrabad International Airport, where the soon-to-be-former hostages would board their flight to freedom.

At ABC News, where I worked at the time, one of our camera crews had been granted access to the Oval Office the previous night. We had video of Carter, looking grim and exhausted, in a cardigan, consulting with his aides until, quite literally, it was time to dress for the inauguration of his successor. Those images and live shots of desperate diplomacy, followed by the stately run-up to the transfer of power in Washington, played on one side of the screen. The preparations for departure from Mehrabad played on the other.

The Iranians stage-managed the drama down to the last second. Precisely at noon, just as Reagan began to recite the oath of office, the planeload of Americans was permitted to take off. The Iranians’ message was blunt and unambiguous: Carter and his administration had been punished for America’s sins against Iran, and Reagan was being offered a conciliatory gesture in anticipation of improved behavior by Washington.

That was hardly the interpretation that the Reagan administration put on the event. The new president portrayed the hostage release as a long-overdue act by which the Iranians acknowledged the obvious: There was a new sheriff in town. The feckless days of the Carter administration were over, and the Iranian mullahs had bowed to the inevitable. Indeed, the administration seemed to be saying that Iran’s greatest concern was now the possibility of U.S. retaliation for the humiliation of the preceding 444 days.

That last point probably was a part of Iran’s strategic calculus. Iran was not then, and is not now, any military match for the United States. Without the American hostages in Tehran, Iran was plainly vulnerable to U.S. power.

Further complicating its position, since September 1980, Iran had been fighting a massive invasion by the Iraqi forces of Saddam Hussein, the beginnings of a bloody war that would last most of the decade. The United States officially proclaimed neutrality – Henry Kissinger famously observed that it was a shame both nations couldn’t lose – but Washington considered Iran the greater threat and covertly assisted Hussein.

Once the hostages were released, however, no reprisal came, and the Iranian leadership offered no evidence of wanting to reconcile.

In their approach to the United States in the decade that followed, the mullahs provided chilling evidence of how closely they had studied the influence of the media and public opinion on U.S. foreign policy. During the hostage crisis, they learned how obsessively engaged our news media becomes when U.S. prisoners are taken. What Americans consider one of our greatest national virtues – concern for the individual – the Iranians recognized as a vulnerability.

We in the American news media have a tendency to obsess over one crisis at a time, often to the exclusion of other important issues. Indeed, I can hardly overlook my own role in this. The title that ABC News gave to its nightly coverage seemed hyperbolic at first, but it proved frighteningly prescient: “America Held Hostage.” The story held America’s interest so tightly and for so long that our specials on ABC eventually morphed into a regular program – “Nightline.”

Iran watched and learned. They realized that the fixations of the American media could lead to shifts in U.S. national policy. They observed how the hostage crisis cost Carter a second term, and they would soon learn that what influenced one administration could be applied to another.

On Oct. 23, 1983, a truck loaded with explosives was driven into a barracks building in Beirut housing U.S. Marines, who were there as part of an international peacekeeping force. The driver died in the suicide attack, as did 241 American military personnel. Eventually, the bomber was identified as a member of an organization called Hezbollah, which was believed to have been funded and trained by members of Iran’s Revolutionary Guard Corps.

By the time even that much was established, Reagan had ordered all U.S. military personnel in Lebanon evacuated to ships of the 6th Fleet, off the coast. A brief time later, those ships received fresh orders and sailed off. There had been no great public support for engagement in Lebanon in the first place, so there was little reaction to the abrupt departure. (The U.S. invasion of Grenada, occurring at the same time, consumed much of the public’s attention.)

Iran saw how a devastating attack could force America out of Lebanon, with little outcry back home and no retaliation for the bombing. And just as hostages had proved useful to Iran during the Carter administration, they would be used again to manipulate the Reagan White House. Dozens of Americans and Europeans were kidnapped in Lebanon and held hostage during the early and mid-1980s. Again, Hezbollah was believed responsible, and Iranian patronage was more firmly established.

In relatively short order, these tactics would draw the Reagan administration into one of the more bizarre covert negotiations in recent history. Among those kidnapped in Beirut was the CIA’s station chief, William Francis Buckley. He was held and tortured for 15 months, and at one point he was reportedly taken to Iran. He died in captivity. Reagan’s distress over Buckley’s ordeal in particular, and over the fate of other American captives, was a factor behind the Iran-contra affair.

Far from punishing the Iranians, Washington arranged for Israel to sell weapons to Iran. The Israeli stockpiles would be secretly replenished by the United States, which was legally prohibited from selling directly to Iran. In return, Iran would free some hostages. Finally, Iran’s payment for the weapons would be used to buy arms for anti-communist forces in Nicaragua, thereby circumventing a congressional ban on sales to the contras there. That was the icing on the cake.

It was a fiasco. Reagan, whose staunch opposition to communism around the world would lead to the collapse of the Soviet empire, found his administration embroiled in negotiations with the sponsors of Hezbollah. The scheme clearly circumvented U.S. law, and had others in the administration not taken the fall, it could have led to Reagan’s impeachment.

What Iran learned in those years – and we’re still absorbing the consequences of those lessons today – is that kidnapping and terrorism are useful weapons against the United States. Ultimately, Reagan’s broad-shouldered bravado was no more effective in dealing with Tehran than Carter’s mild-mannered diplomacy.

We’ve still not found our way. Instead of taking military action against Iran, the United States has twice invaded Iran’s bitterest enemy, Iraq. And what Iran couldn’t do for itself, George W. Bush did for it: Saddam Hussein is gone, and Tehran’s influence in the Persian Gulf is greatly enhanced.

There was every reason to celebrate the release of those 52 Americans on Jan. 20, 1981. But what Iran learned then and has applied in the decades since has been costly for the United States. Here we are, 30 years after what we thought was the conclusion of a crisis, still wondering if the end will ever be in sight.

Ted Koppel, who was managing editor of ABC’s “Nightline” from 1980 to 2005, is an NPR commentator and a contributing analyst for “BBC World News America.”