Weekly Standard: The MEK has taken its case to court. On May 8, it will ask the U.S. Court of Appeals, D.C. Circuit, to order the secretary of state to act within 30 days on the removal of the FTO designation. State has already delayed its decision for almost two years. 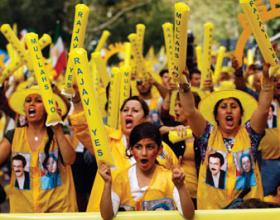 The Treasury Department has issued subpoenas to the speakers’ agencies of 11 prominent former U.S. officials, including a governor of Pennsylvania, a chairman of the Joint Chiefs of Staff, and director of Homeland Security, who have given speeches on behalf of the Mujahedin e-Khalq, or MEK. Treasury’s action is meant to find out whether Ed Rendell, Hugh Shelton, Tom Ridge, and others have taken money from an outfit designated by the State Department as a foreign terrorist organization (FTO).

However, the nub of the case is whether the MEK merits the designation. The former officials contend that the group of Iranian exiles based in Iraq hasn’t used violence in over a decade and doesn’t fit the State Department’s definition of a foreign terrorist organization. The last time the MEK waged an operation against Americans was in the mid-1970s, and in recent years it willingly handed its weapons over to U.S. troops at Camp Ashraf in Iraq. Neither, say its advocates, does the MEK qualify as a threat to U.S. national security, especially given that the organization provided the Bush administration with intelligence regarding Iran’s nuclear facility at Natanz.

The MEK has taken its case to court. On May 8, it will ask the U.S. Court of Appeals, D.C. Circuit, to order the secretary of state to act within 30 days on the removal of the FTO designation. State has already delayed its decision for almost two years.

To some, it appears that it was precisely this public campaign that annoyed the Obama administration, which on this reading responded by unleashing the Treasury Department on former U.S. officials. The timing is suggestive: Even though many of the former officials speaking out for the MEK have been at it for more than a year, it was days after what was said to be an especially contentious meeting between lawyers for the MEK and the State Department that the Treasury started issuing subpoenas.

The advocates for the MEK haven’t mysteriously gone soft on terrorism. Rather, the MEK and Washington story is one of bureaucratic stasis, the petty exercise of power, and the repeated failures of U.S. policymakers in their dealings over three decades with the Islamic Republic of Iran.

The MEK, which is part of a coalition called the National Council of Resistance of Iran, and identified in U.S. court documents as the People’s Mojahedin Organization of Iran, was an anti-shah student movement founded in the mid-’60s. Its ideology was a mixture of revolutionary internationalist anti-imperialism, Marxism, Islam, and a uniquely Persian blend of mysticism and metaphysics privileging sacrifice and suffering. In the wake of the 1979 Islamic revolution, the MEK sided with the Khomeinists for a time. But within two years, the MEK and Iran’s Revolutionary Guard Corps were at war with each other.

Whether Iran’s current ruling order fears the MEK because this onetime ally poses a threat to the regime is a matter of dispute. The reality is that their enmity is shaped by the nature of the conflict they waged against each other—not a civil war but a fratricidal struggle, with hundreds killed on both sides. Some MEK cadres fled to Iraq and others to France, where the government in Paris set the precedent for what would soon become a habit of Western policymakers—cracking down on the MEK at the behest of Tehran, in exchange for expected concessions from the Islamic Republic.

In 1986, Hezbollah was holding hostage nine French nationals in Lebanon, and in an effort to get Iran to secure their release, France expelled MEK leader Massoud Rajavi. Iran’s Lebanese proxies freed only two hostages, but that didn’t stop France from going back to the well. In 2003, according to the former editor of the Journal du -Dimanche, French foreign minister Dominique de Villepin sought concessions for the French energy giant Total S.A. and flexibility on the nuclear issue and in exchange agreed to round up hundreds of MEK members in France, on charges later summarily dismissed by a French counterterrorism court.

Since the mid-’80s, Tehran had been lobbying Western governments to designate the MEK a terrorist organization, and in 1997 its work paid off in Washington. Mohammad Khatami had just been elected president of Iran, and as a sop to a man deemed moderate by the standards of the Islamic Republic, the Clinton administration agreed to list the MEK as an FTO.

The road map charted by Sandy Berger and Madeleine Albright never led to the dialogue of civilizations that Khatami promised, and Washington was stuck with an albatross around its neck. The MEK had not participated in a terrorist attack on Americans since the mid-’70s, and even then it seems that the group responsible for at least some of the violence was a Marxist element within the MEK. Regardless, as Reuel Marc Gerecht, an Iran specialist at the Foundation for Defense of Democracies, tells me, “they were never as bad in their anti-American activity as the PLO.” Palestine Liberation Organization chairman Yasser Arafat had given direct orders to kill the U.S. ambassador to Sudan, Cleo Noel, and yet during the Clinton years the late PLO leader was a welcome guest at the White House. “If the PLO can be rehabilitated,” says Gerecht, “so can the MEK.”

The confusion that the Clinton administration had sown by politicizing an FTO designation would be compounded after the 2003 invasion of Iraq. The MEK had long been hosted by Saddam Hussein, and stands accused of fighting alongside him in the eight-year-long Iraq-Iran war. U.S. forces moved the remaining MEK members from various sites around Iraq to Camp Ashraf. “It was in the middle of nowhere and a great place to disarm them,” says Brig. Gen. David Phillips, the retired commandant of the U.S. Army Military Police, whose job was to disarm the MEK.

Phillips says that in the wake of 9/11 he was thrilled to have the opportunity to stick it to a band of terrorists. But that’s not what he found. “We investigated all 3,400 members with the FBI,” Phillips says. “I thought the FBI would come with a list, saying these are the 200 people we want, and I continued to pressure my intelligence officers, but they kept coming back to me, saying, ‘Sir, we can’t find much.’ The FBI found no credible allegations against them and said we’re out of here.”

Donald Rumsfeld’s Pentagon promised that in exchange for disarming, the MEK would receive protected person status, but now, says Phillips, “we’re walking away from that promise.” The reason, as usual, is trepidation about antagonizing the Iranian regime, and the self-inflicted anxiety that seems to strike U.S. policymakers whenever it comes to dealing with the Islamic Republic.

Tehran wanted Iraqi prime minister Nuri al-Maliki to close Ashraf and expel the MEK, and the Iraqi prime minister sought relief from the Americans. Some U.S. officials argued that it was wrong to go back on a promise to a population under its protection and urged Secretary of State Condoleezza Rice to delist the MEK. If the MEK were free of the FTO designation, the United States could have accepted some of its members as refugees and encouraged allies in the region and Europe to do the same. Rice balked, fearing the Iranians would take their anger out on U.S. troops, sending even more IEDs across the border to kill Americans.

The problem was passed on to Secretary of State Hillary Clinton, who has bizarrely explained that a “key factor” in her decision on the MEK’s designation will be the organization’s “cooperation in the successful and peaceful closure of Camp Ashraf” and relocation to Camp Liberty, an Iraqi facility where conditions, say MEK advocates like Phillips, are horrific.

The point of moving the group from Ashraf to Liberty is to separate them from their communication sources. “We do the same thing in the U.S. Army,” Phillips explains. “Cellphones, anything they use to communicate with, the Iraqi security forces are taking away from them. It’s cutting them off from the world.”

Worse, says Phillips, the Iranians are likely waiting for all of the MEK leadership to be moved from Ashraf to Liberty before they start “disappearing” people. It was only a few days after the United States withdrew its protection at the end of July 2009 that Iraqi security forces killed 11 at Ashraf and wounded more than 500. In April 2011 the Iraqis attacked Ashraf again, killing 36 and wounding 345.

Phillips believes that at Liberty, cut off from the rest of the world, it can only get worse for the MEK. “If I know Maliki, he’ll put them on buses and hand them over to the [Iranian] Qods Force.”

American credibility and prestige are on the line, says Phillips, not only in how we treat people under our protection but also in how we deal with Iran. “We’re afraid of sending the Iranians a strong message and getting them mad. But that’s exactly the message we want to send them.”

Lee Smith is a senior editor at The Weekly Standard.

Reuters: The Bush administration is looking at slapping sanctions...