Did Iran’s president feign having PhD?

Huffington Post: As more facts from Rouhani’s past are unearthed, questions have been raised regarding who really is Iran’s new president, and more importantly, if he will be able to legally take office based on the new astonishing information released by few outlets. The Huffington Post

In less than a week, Hassan Rouhani, Iran’s president-elect, will assume the presidential office and replace the hardliner and controversial figure, President Mahmoud Ahmadinejad. However, as more facts from Rouhani’s past are unearthed, questions have been raised regarding who really is Iran’s new president, and more importantly, if he will be able to legally take office based on the new astonishing information released by few outlets. One significant fact was recently revealed which has yet to penetrate into English media and receive international media attention.

The more recently-exposed information reveals that Hassan Rouhani — before holding a PhD degree, or even a Master’s degree — was already claiming in 1979 to have a doctorate degree from London University. On March 9, 1980, in an interview with Joomhoriye Islami, one of the most significant newspapers circulating in Iran, Rouhani stated that he had received his PhD in “Legal Sociology” from the University of London. The newspaper wrote that he received his PhD in 1979; twenty years before Rouhani actually received a higher degree from another university: Glasgow Caledonian University.

In 1980, after the overthrow of the Shah, Rouhani ran as a candidate from the city of Semnan for Iran’s National Assembly and Parliament. After a successful victory, Rouhani served for five terms in both the National Assembly and Parliament, but was describing himself as a scholar who had already obtained a PhD from the University of London, although he did not even have Masters at that time. These claims are evidenced by the Joomhoriye Islami newspaper publications dating from 1980 to 1988 as well as by the five registration forms published by the Iran’s parliamentary elections in which Rouhani ran as “doctor” and won the votes for five consecutive terms.

Moreover, when Rouhani first ran for the parliamentary elections, he introduced himself as “Doctor Rouhani” in the official website of the Iranian Parliament. During the third parliamentary elections in 1988, according to the website, Rouhani also suggested that he had a Master’s degree along with the Doctorate.

Interestingly, while Rouhani’s English Wikipedia page mentions that Hassan Rouhani claimed that he was a PhD-holder since 1980, Rouhani’s Persian Wikipedia page — which is primarily read by Iranian people and Persian speakers- has deleted this section. Any attempt to add this part has been reverted by other Wikipedia Persian editors.

For example, the following form which was published by the Iranian Parliament clearly reveal that Hassan Rouhani climbed through the political ladder while portraying himself as a scholar from higher education. For each parliamentary term, there is a form in which he claimed to be a PhD holder. 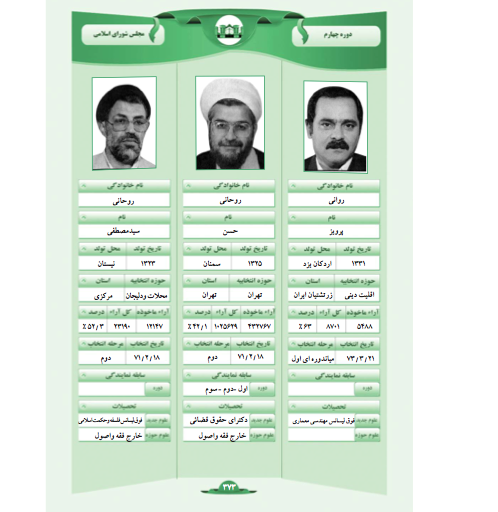 In addition, according to several reports that closely tracked the president-elect’s related documents, Rouhani has frequently used a fraudulent PhD degree document while running for the first-to-fifth parliamentary elections, feigning himself as a PhD degree holder in sociology.

For all the aforementioned positions, Hassan Rouhani feigned as a PhD holder and as “Doctor Rouhani.” Are these new revelations significant considering the geopolitics of Iran and the Iranian citizens?

Although the plagiarism case might not have legal significance, counterfeiting a university degree and portraying oneself as a PhD holder while not even having obtained any graduate degree does have legal consequences in Iran. According to Iran’s Islamic Penal Law Code article 527, any official who lies about his education, forge their university transcripts, or creates a fraud university degree will be sentenced from one year to 36 months in prison.

However, it is unlikely that the Iranian government will hold Hassan Rouhani accountable for his actions. Rouhani is a governmental insider; his loyalty lies with Khomeini and Khamenei, he is a benefiter of the cleric system, and was approved by the Guardian Council to run for presidency. Yet, the counterfeiting of a Doctorate degree and impersonation of a London-educated intellectual has undoubtedly played a significant role in helping Rouhani climb the political ladder and even become elected president. An overwhelming of Iranian people highly value education and highly favor those candidates who have obtained a PhD, particularly from Western countries which they believe offer a more open-minded education.

What do Rouhani’s past actions suggest about his morals and personality? It suggests that Rouhani’s first priority has been to use any tool possible — even if it means deceiving the Iranian people — in order to achieve his political ambitions. If honesty has not been a criterion for “Doctor Hassan Rouhani”, the President-elect of Iran, how can millions of Iranian citizens believe in all his promises that he made throughout his campaign? If gaining power and influential positions have been his main goal with disregard to ethics, how can the international community, IAEA, and other regional countries trust the sincerity of his actions?

Majid Rafizadeh, an Iranian-Syrian scholar, is president of the international American Council on the Middle East and senior fellow at Nonviolence International.