The promises of the United Nations

UPI: We have seen failures of the United Nations in protecting refugees. If the world stands by and watches, the same could happen to Iranian refugees in Iraq.
United Press International 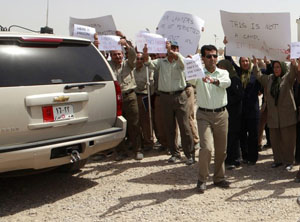 WARSAW, Poland, Aug. 9 (UPI) — We have often seen failures of the United Nations in protecting refugees in danger zones. It happened in Rwanda, Bosnia and Sri Lanka with thousands of innocent people killed. If the world continues to stand by and just watch, the same could happen to several thousand Iranian refugees in Iraq.

I recently attended a hearing in Foreign Affairs Committee of the European Parliament for Martin Kobler, whose tenure as head of the U.N. Assistance Mission to Iraq was ended this month with a controversial record.

UNAMI’s mandate in Iraq includes “promoting the protection of human rights and judicial and legal reform,” among other responsibilities. But instead the head of UNAMI had been accused of repeatedly distorting the realities on the ground in Iraq, particularly in regards to the fate of the Iranian refugees in Camp Liberty.

The refugees in Liberty aren’t ordinary refugees but members of Iran’s largest opposition group, the People’s Mujahedin of Iran.

They have resided in Camp Ashraf, north of Baghdad for 25 years, fighting for a democratic secular Iran. As a result they have become targets of the Iranian regime and its agents in Iraq.

Due to pressure from the Iraqi government, and ongoing threats against Camp Ashraf, UNAMI took the lead to move the residents to a “safer” location named Camp Liberty just outside Baghdad airport. It was designated a “transit camp,” a step in the process of rapid resettlement abroad.

But instead Camp Liberty has turned into a “killing field.” The residents have been murdered and injured in repeated rocket attacks against the camp, while only a tiny percentage of the population have been able to leave to other countries in the past two years.

From the start of the relocation, the U.N. envoy acted with duplicity. He misrepresented the conditions in Camp Liberty by showing doctored photographs of the camp and making promises that it was safe and secure. The truth about Camp Liberty was exposed by the Working Group on Arbitrary Detention, which described the conditions as nothing short of a prison.

UNAMI also closely collaborated with the governments of Iraq and Iran, which would like nothing more than to see the Iranian opposition suffer and be destroyed.

I was particularly appalled of the attempts to white wash the massacre of dozens of Iraqi protesters. During his testimony at the European Parliament, the U.N. envoy vaguely stated that the Iraqi military has a “problem with crowd control,” while offering no direct criticism of the government.

The pattern of deceit and distortion continued during his concluding testimony in front of the U.N. Security Council in New York in July. He took the opportunity to once again demonize the refugees in Liberty, and project his own failures in relocation and security onto the defenseless camp members.

However U.N. High Commissioner for Refugees Antonio Gutierrez has taken a more responsible position. He recently released a statement that highlighted the legitimate concerns of the residents of Liberty. In contrast to UNAMI’s claim that the leadership in the camp is responsible for its own “rights abuses,” the UNHCR took a firm stance toward the Maliki government in Baghdad.

“International law requires that asylum-seekers must be able to benefit from basic protection of their security and well-being …The primary responsibility for ensuring respect for these standards lies with the government of Iraq. Freedom of movement is the most desirable state while processing takes place,” the statement noted.

The statement by UNHCR stands in stark contrast to the misinformation disseminated by Martin Kobler, indeed he became such a problem that the United Nations had to save face by transferring him to a new position as U.N. envoy to the Congo.

The move could be aimed to remedy the damage that he has done to the credibility of the United Nations. His broken promises have not only shattered the credibility of UNAMI and that of the U.N. secretary-general who backed him until the last day but have paved the way for the killing of innocent refugees in Iraq.

Had it not been for the international efforts of the residents’ families and their supporters abroad, these refugees would have been massacred just as Srebrenica.

Despite these bitter lessons, I remain optimistic that the new head of UNAMI, my former colleague in European Parliament from Bulgaria Nikolay Mladenov, will be objective to take the issue of the security of the refugees in Ashraf and Liberty seriously and to defend those values and principles that the United Nations was once based on.

British-born Polish politician and former journalist Ryszard Czarnecki has been a member of the European Parliament since 2004 and former European minister of Poland.

Iran claims to have arrested separatists on frontiers