The Hill: Unspeakable torture and a high possibility of impending death awaits seven Iranian dissidents who are currently being held illegally by Iraqi forces. And it seems the international community is simply watching and waiting until this becomes a reality.
The Hill 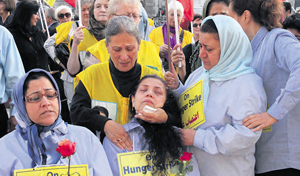 Unspeakable torture and a high possibility of impending death awaits seven Iranian dissidents who are currently being held illegally by Iraqi forces. And it seems the international community is simply watching and waiting until this becomes a reality.

The incarcerated dissidents were residents of Camp Ashraf, a once barren piece of land, which was transformed into a modern community by its exiled Iranian residents who have called it home for nearly a quarter century.

The residents of the camp, all members of the People’s Mojahedin Organization of Iran (PMOI/MEK) were originally granted “protected persons status” under the 4th Geneva Convention by both the US and the UN. As former Vermont Governor and DNC Chairman Howard Dean put it, “When we disarmed them, we promised them in writing that each one of them has a piece of paper that says that the United States would protect them. We have not done that.”

The seven Iranian unarmed dissidents (six of them women) have been held hostage since the early morning of September 1, when Iraqi forces burst into Camp Ashraf at the behest of the Iranian regime. The camp’s residents, who consisted of unarmed civilians, were guilty of no crime, other than their opposition to Iran’s regime, yet the Iraqi Special Forces paid no heed to their legal protection.

Of the 100 remaining residents of Camp Ashraf, all of whom have been individually classified as “protected persons”, 52 were mercilessly slaughtered. In the aftermath of the attack, the United Nations Assistance Mission in Iraq (UNAMI) found that most of the victims were handcuffed or tied and indiscriminately shot in the head.

For the few who were lucky enough to survive the initial horrors and were taken to a medical clinic for treatment, a similar fate awaited. Instead of meeting doctors, these unfortunate civilians were met by trained assassins, whose grim job was not to save life, but to end it.

This terrible tragedy has led to widespread condemnation, from the U.S., UK Foreign Office, U.N. and Amnesty International. While no action will erase what happened for those who lost family, friends and loved ones, inaction by the international community will add to the heartbreak and injustice.

Despite claims by the Iraqi government, which insists that it is not holding any hostages, strong evidence has surfaced to indicate otherwise.

On September 13, the U.N. High Commissioner of Refugees released a statement, which declared; “According to reports reaching UNHCR, seven individuals formerly residing in Camp New Iraq disappeared from the Camp on 1 September, are being held somewhere in Iraq.”

Catherine Ashton, High Commissioner of the E.U. echoed the UNHCR’s statements in a letter to the European Parliament on September 19th stating, “we have reason to believe that up to seven camp residents are being held in captivity near Baghdad, and that there is a significant risk that they could be sent to Iran.”

Further a documents recently leaked to the Iranian resistance indicate that the hostages are under the personal control of Nouri al-Maliki, the proclaimed ally of the United States. Such a brazen act by an ally and beneficiary of the U.S. and E.U. must not be met with silence.

In order to maintain credibility with respect to the Iranian regime, whilst upholding international law and humanitarian values, the U.S. and E.U. are obliged to demand the prisoner’s release.

Clearly the E.U. and especially the U.S. have leverage and inaction is simply untenable.

Furthermore, the United States must deny Maliki the honor of a state visit until the hostages are released. The E.U. and U.S. also have the ability to threaten a review of military and economic ties if these innocent civilians continue to be incarcerated.

Each of these actions would help to safeguard the lives of those being held hostage and show that Iraqi actions at the behest of Iran, especially when involving civilians, will not be tolerated.

Actions need not be confined to the E.U. and U.S. since a U.N presence would also help prevent further carnage involving the 3,000 Iranian civilians, many of them children, who are stationed in and around Camp Liberty. Such action, coupled with an independent investigation would do much to safeguard innocent lives.

These actions will not come easily and silence by individuals will assure the silence of governments and consequently their complicity in the murder of innocents. It is up to those willing to speak up in order to stop the slaughter of civilians to do so!

Lives of seven innocent Ashraf hostages hang in the balance and we must do all we can to ensure their safety. It’s time to speak out!

Binley is a Conservative member of the UK House of Commons and president of the International Parliamentary Campaign in Defence of Ashraf and Liberty (IPCDA).

AFP: Iran's President Hassan Rouhani is not "optimistic" about...