Augusta Free Press: Iranian hunger strikers turn the worst of times into the best of times. By example, they turn Charles Dickens’ winter of despair into a spring of hope. Like Nelson Mandela’s pursuit of justice and reconciliation never wavered when facing persecution, so hunger strikers gain unity and resilience in face of tyranny. 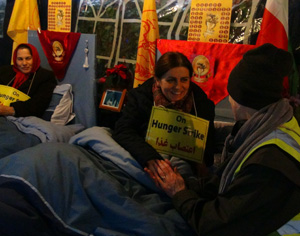 Iranian hunger strikers turn the worst of times into the best of times. By example, they turn Charles Dickens’ winter of despair into a spring of hope. Like Nelson Mandela’s pursuit of justice and reconciliation never wavered when facing persecution, so hunger strikers gain unity and resilience in face of tyranny.

Consider Mandela’s April 1964 statement from the dock at his trial for sabotage: “I have cherished the ideal of a democratic and free society in which all persons live together in harmony and with equal opportunities. It is an ideal which I hope to live for and to achieve. But if needs be, it is an ideal for which I am prepared to die.” Likewise, preparation for death highlights the narrative of hunger strikers’ under siege in Iraq and whose associates are persecuted in Iran: Repression cannot destroy the Iranian opposition because violence cannot kill an ideal.

Iranian dissidents engaged in worldwide hunger strikes represent the best of times because the strikes have the unexpected effect of creating unity and resilience. In an email of November 23, 2013, the Former Senior Antiterrorism Officer for all Coalition Forces and Operations Chief and Base Commander at Camp Ashraf, Iraq wrote, “I cannot imagine any other group of people who have endured so much for so long, with no signs of relief, displaying such self-control. Not one single person has defected or attacked one of their oppressors. Through the despair they have maintained self-dignity, mutual respect, and concern for each other.”

UN rights experts demanded on December 9 for Baghdad to determine what happened to 7 Iranian opposition members missing since a September 2013 attack on their camp in Iraq. The UN Working Group on Arbitrary Detention has regularly maintained that detention in Camp Ashraf was arbitrary.

Just like Baghdad, Tehran shows no inclination to compromise. Iranian clerics use violence to stamp the opposition down. Only the groups that display twin traits of unity and resilience outlive their rivals. Organizations that possess these traits have thrived, while groups without such attributes are extinct. Whether they live or die, the hunger strikers represent the grand tradition of Iranian oppositionists whose movements survive in the face of adversity, and they are in a position to effect regime change in Iran, with at least moral encouragement from Washington.

International Human Rights Day, which occurred 10 December, intersected with celebrations of Nelson Mandela’s life. As we bask in his message of reconciliation, Iranian dissidents languish in prison-like conditions in Iraq, 52 were killed by Iraqi Security Forces at the behest of the Iranian regime, 7 are held as hostages, and many others engage in worldwide but hardly-reported hunger strikes.

Actions of Iraqi Prime Minister Nouri Al-Maliki, Iran’s Supreme Leader Ali Khamenei, and its President Hassan Rouhani, intend to make the worst of times for Iranian dissidents. The irony of their repression is that it is having the opposite effect. Al-Maliki’s incarceration of Iranian dissidents shows intent to destroy their morale. And there is collusionacross the Shatt Al-Arab River between Iraq and Iran: Maliki just visited Tehran to receive Khamenei’s endorsement for a third term in office in exchange for suppression of Iranian dissidents in Iraq and extradition of 7 survivors as hostages to Iran. There is strong possibility Iran encouraged Maliki to launch another attack on Iranian dissidents in Iraq for support of his attempt to secure a third term in Iraqi elections scheduled for April 30, 2014.

During Rouhani’s charm offensive to woo and dupe the West on Iran’s nuclear violations, its human rights record remains the same since he became president. Cosmetic changes include release of some dozen political prisoners on the eve of Rouhani’s 2013 UN visit, choreographed to boost his international image. Iran’s 500 executions, lead the world in executions per capita, and at least 250 have come after the election of Rouhani.

Following the 1988 ceasefire with Iraq, Iran’s Supreme Leader ordered mass executions of political prisoners, most of whom were predecessors of the Iranian dissidents in Iraq. But the executions inspired the movement for a free Iran. Hunger strikers and political executions of 2013 create unity and resilience for the movement toward a free Iran, turning the winter of despair into a spring of hope.

But America is the missing actor. President Obama, now is the time to stand with the Iranian people against the tyrannical regime in Tehran; if not you, then who? Now is your time.

Raymond Tanter served on the National Security Council staff in the Reagan-Bush administrations and is Professor Emeritus at the University of Michigan. His latest book is “Arab Rebels and Iranian Dissidents.”

By Jubin Katiraie Earlier this week, the British government...