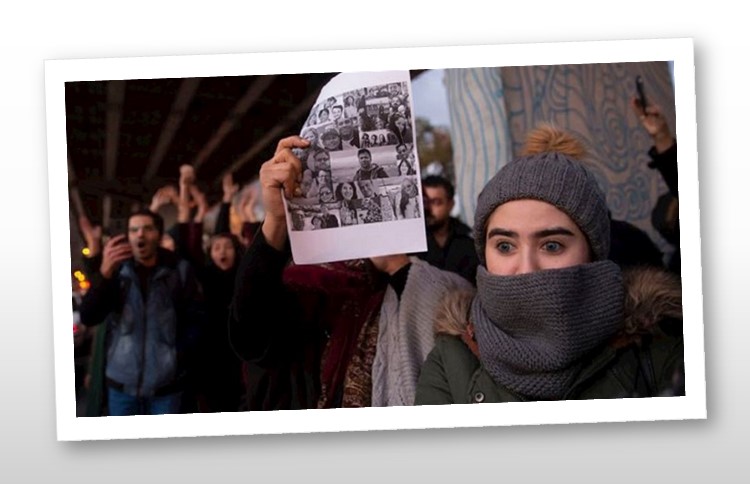 Apart from the huge human loss, IRGC’s shooting down of a Ukrainian airliner on January 8 marked an important point in the Iranian internal situation.

In November last year, protests against a threefold hike in gasoline prices covered more than 190 Iranian cities. Protesters quickly upgraded demands on gas prices to demands more freedom and ultimately, a political regime change. The regime was only able to take control of the situation through brutal repression, leaving 1500 killed and several thousand wounded. More than 10000 people were arrested and most of them still stay in custody.

The last similar uprising against the regime had died down in the summer of 2018. So authorities counted on at least a year-long relative calm before people would be back in the streets against them.

The killing of IRGC’s Quds Force commander Qassem Soleimani by the US was exploited to the full by the regime to mobilize the maximum possible force in a bid to counter the huge demonstrations asking for regime change. The mullahs boasted more than a million people participating in Soleimani’s funeral, although efforts to cramp the mob in narrow passages in Kerman, burial site of Soleimani, to produce strong video effects on the presumed participation resulted in near a hundred people killed in the stampede.

All that setup and hopes for relative calm vanished into thin air with the spontaneous popular protests against the three days long cover-up of the IRGC’s downing of the Ukrainian airliner. Public rage over the highest authorities denying the shootdown, and then their confession following international pressures by Canada and other countries’ authorities poured into the streets.

The new several day-long demonstrations of anger against the regime were unique in several aspects.

First of all, virtually all slogans chanted by protesters aimed at the highest authority, which is the supreme leader, Ali Khamenei. People asked him to step down as the commander in chief of the IRGC.

Then, the IRGC itself came under unprecedented attack. Qassem Soleimani’s huge posters hanged in public places for his funeral ceremonies were torn down by angry protesters. In a rare act of recognizing opposition to the regime, Khamenei lamented the nationwide burning of such posters in his Friday prayer sermon on January 17, complaining that “a few hundred protesters tore and burned the posters of our hero.”

Another important aspect was the vivid participation of university students and the universities in the protests. Academic circles were absent in November 2019 as well as 2017 and 2018 several month-long demonstrations in the country. Three big Engineering colleges historically known in the country for their role against the Shah’s regime entered into full protests against the regime during the recent four day long demonstrations.

In the new intellectual wake, a number of artists and social celebrities took a clear distance from the regime. A yearly cultural event, the Fajr festival held every year in commemoration of the 1979 uprising that brought down the Shah, came close to being called off because of the great number of participants abandoning the show.

Slogans were almost the same everywhere. “Down with Khamenei, he is a killer, his regime is illegal”, “IRGC is incompetent, they are killers”, “Khamenei steps down”, “Down with the oppressor, be it the Shah or Khamenei”, “Reformist, hard-liner, the game is over”. In the slogans, a fate similar to that of the Shah’s regime was predicted for the regime, all factions included.

The state-owned newspaper Jomhouri Eslami wrote on January 12: “What is evidently present in all these slogans, is words and phrases coming from Albania,” a clear reference to the opposition MEK now having its official premises in Albania.

MEK/PMOI began relocating from Iraq to Albania in 2014, with the relocation completed in 2016. In 2017, they built their new base named Ashraf3 in Albania, and have been playing an everyday increasing role in the Iranian political scene ever since.

During the 2017-2018 uprising, Khamenei blamed them to be one of the three major players, apart from the US and “rich Arab countries of the region” according to his interpretation.

In the November 2019 nationwide uprising, authorities mentioned the important role of the MEK’s resistance units in the unrest and attacks against government entities.

AFP: The United States is considering setting up a...

AP: An Iranian nuclear official says Tehran will not...