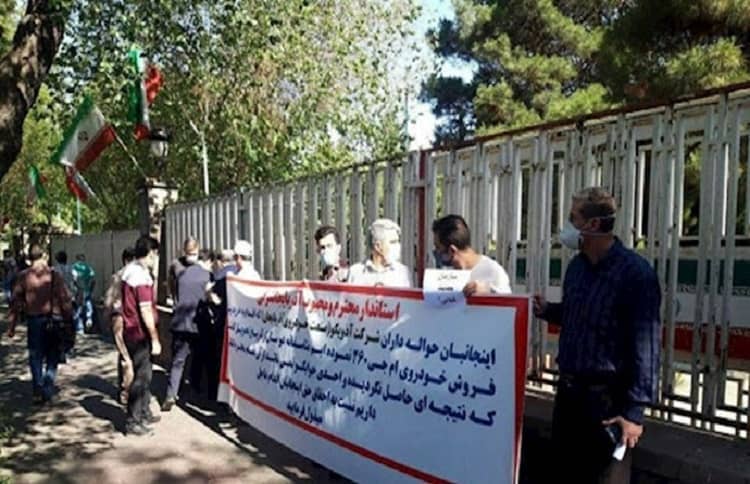 Yet more workers’ protests rocked Iran on Monday, August 24, which coincided with the regime’s “Government Week”, an annual event where the regime supposedly chooses what projects to work on in the next year.

In Qazvin, workers from the Qazvin Counter Manufacturing Plant protested with their families to demand the payment of their much-delayed wages and an end to their employment status being left in limbo. They also blocked the path of Mohammad Bagher Nobakht, head of the regime’s Budget and Planning Organization, who was visiting the city for Government Week.

Another group of Qazvin Counter Factory workers, demanding the same things, made their way to the front of the Qazvin governorate building to hold their protest.

Meanwhile, on Sunday, 27 workers on the Bid Boland 2 Mapna refinery (MAPNA Khuzestan Power Generation Company), who were expelled from the refinery, and their families held a protest rally outside the governor’s office in Pakdasht, Behbahan, southwest Iran.

One worker said: “We will continue our protest every day at 6 pm until our demands are met.”

This comes just days after workers’ strikes in other parts of the country.

On August 15, the employees of the Haft Tappeh Sugarcane Company continued their strike for the 62nd day in Shush, Khuzestan province.

While on August 13, workers at the Jahan Ara Arvand Steel Factory in Khorramshahr, southwest Iran, went on strike to demand higher wages.

On the same day, the workers of Iran’s oil, natural gas, and petrochemical industries continued their strike for the 13th consecutive day. The employers, scared of the protester’s ability to bring the country to a halt, had contacted the workers and bribed them with up to $435 but the workers did not accept.

The National Council of Resistance of Iran (NCRI) said: “The mullahs’ regime, experiencing the 1979 revolution, is in a state of panic as oil sector workers in many cities begin and continue their protests and strikes. Regime officials are resorting to a variety of deceptive measures and lies to prevent the workers from continuing their strikes. The anti-labor policies of this regime have left Iran’s workers and toilers desperate and barely making ends meet, and they are forced to protest and launch strikes to get their basic rights.”

In 1990, the regime banned any type of sit-in, strike or demonstration, as well as the forming of any labor union not directly controlled by the regime.

AFP: Foreign ministers from the Group of Eight industrial...