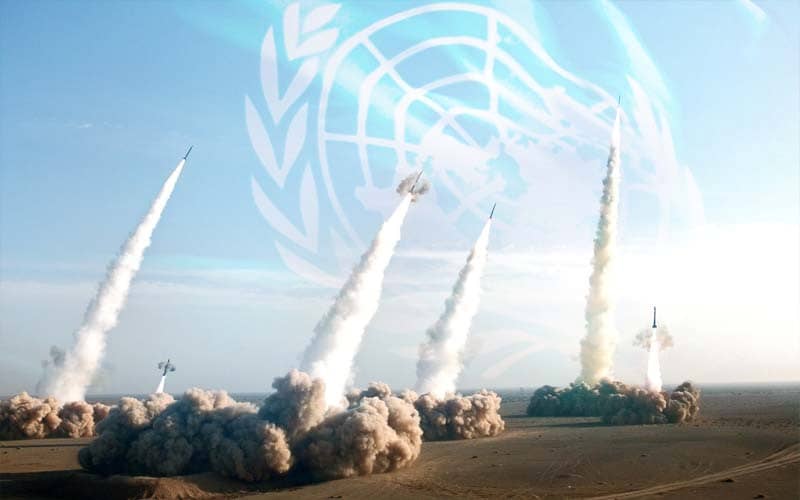 On August 14, the United Nations Security Council (UNSC) rejected an initiative by the United States to extend the arms embargo resolution on Iran.

However, it practically approved triggering an arms race in the Middle East at the expense of the people of Iran and the region.

Since the establishment of the Islamic Republic, its founder and first supreme leader Ruhollah Khomeini built up the regime’s foreign policies on expansionism under the banner of “exporting the revolution.” Khomeini, in fact, dreamed of shaping a Shiite empire. He had frequently spoken about “Shiite Crescent.”

In this respect, Khomeini began to provoke the Iraqi people and army to either stage a coup d’état or an uprising against the government. Simultaneously, forces loyal to Khomeini engaged in sporadic clashes with Iraqi borders guards. These developments led the two countries to an eight-year war that plunged millions of citizens on both sides in a quagmire of blood and tears with thousands of burned and abandoned cities and towns.

However, Khomeini insisted on the continuation of the war under deceitful slogans such as “The peace is equal to burial Islam,” “War, war, until removing the sedition across the globe,” and “We continue the war to the last home and brick in Tehran.”

In June 1982, based on an accord signed between the Iraqi government and the Iranian opposition coalition National Resistance of Iran (NCRI), Iraqi troops departed Iranian territories. The accord that had been known as the “Peace Plan” ensured Iran’s interests. Based on the plan, the Iraqi government pledged to pay compensations for Iran’s losses and victims. However, Khomeini rejected the deal and continued the war for six more years under the pretext of “Holy Defense.”

It is worth noting that Khomeini’s successors have yet to make a peace deal with the current Iraqi government despite the fact that Saddam Hussein was overthrown and Iran-aligned figures such Abdul-Aziz Hakim, Nouri Al-Maliki, Hadi Al-Ameri, and others who had spent rest of their lifetime in Iran took the helm.

After the end of the Iran-Iraq war, the Iranian government did not abandon its expansionist policies. It started terrorizing and meddling in the affairs of neighboring countries and predicated its survival strategy on indirectly igniting conflicts through its proxies and other extremist groups such as Al-Qaeda in Afghanistan.

In other words, the ayatollahs exploited human crises in the region to divert public opinion about their destructive function inside Iran and abroad. They practically “fished in muddy waters.” In fact, in parallel with the domestic suppression, the ayatollahs severely pursue regional aggression to exude power.

In this regard, they have constantly continued their nuclear ambitions to obtain nuclear weapons either through purchase from other states or building by themselves. Simultaneously, the ayatollahs advance their provocative ballistic missile programs and fund terrorist groups such as the Lebanese Hezbollah, Houthis in Yemen, and Shiite militias in Iraq, as well as the Syrian government as their main allies.

Since 2006, in response to Iranian officials’ adventurism, the UNSC had imposed an arms embargo on the country, which banned Iran from trading heavy weaponry systems, advancing and testing ballistic missiles’ capabilities, and improving the government’s unconventional warfare equipment.

In April 2015, based on the nuclear negotiations and accord, formally known as Iran 2015 nuclear deal or Joint Comprehensive Plan of Action (JCPOA), world powers loosened restrictions. The Iranian regime agreed to stop its nuclear activities, put aggressive actions aside, and, in brief, behave like a normal state.

However, Iranian authorities not only secretly continued their nuclear program but also used economic relief, including billions of dollars in credit and cash, to boost their oppressive and aggressive apparatuses, summarized in the Revolutionary Guard (IRGC) and its subsidiaries such as Quds Force, Lebanese Hezbollah, Iraqi Kataib Hezbollah, etc.

“I think that some of it will end up in the hands of the Revolutionary Guard or other entities, some of which are labeled terrorists,” said former U.S. Secretary of State John Kerry in the interview in Davos in January 21, 2016.

On June 18, Amir Assadollahi, a pilot of the IRGC-owned Mahan airlines said in his memories that back in 2013: “I transferred ‘seven tons of prohibited cargo’ to Syria with former IRGC-Quds Force Commander Qassem Soleimani on board. He implicitly affirmed that the IRGC recruited a passenger airliner to carry out weapons and missiles.”

Furthermore, on August 20, the German Die Welt revealed new information regarding the devastating August 4 explosion in Beirut. The German magazine reported that between 2013 and 2014, the Iranian government had shipped over 1,000 tons of Ammonium Nitrate to Beirut in a collaboration between Qassem Soleimani and Hezbollah.

It is worth reminding that coalition troops in Iraq frequently discovered and impounded warehouses of Iranian weapons and ammunition used to target foreign troops and Iraqi figures who opposed the ayatollahs’ meddling in their country.

On June 30, 2018, at Free Iran Grand Gathering, the former commander of the coalition troops in Iraq, Gen. George Casey said, “I firmly believe that Iran bears responsibility because their training and equipping of the Iraqi militia groups was the major factor in sustaining the sectarian violence that swept Iraq in 2006 and 2007… And to me that makes Iran directly responsible for the death of hundreds of coalition forces and thousands of Iraqis.”

On the other hand, the Iranian government used to advance its ballistic missile programs throughout these years. In this context, a day after the UNSC’s nay vote, the IRGC unveiled its new LRBM. On August 15, Afkar News website openly threatened the U.S. in an article titled, “American soil has been placed under Iranian missiles’ range.” Iranian military analysts claimed that new ballistic missiles enable the regime to target American soil and probably kill 90 percent of the U.S. population.

Moreover, on August 20, Iran unveiled two new missiles — a surface-to-surface ballistic missile and a naval cruise missile —named “Haj Qassem [Soleimani]” and “[Iraqi militia leader] Abu Mahdi al-Muhandis.” Even though both missiles had been copied from Russian and North Korean designs, but they give the country new capabilities to destabilize the region.

Considering these developments, it is unlikely that the Gulf States will remain idle, and they will definitely try to boost their own arsenals to protect their soil from Iranian aggression. Therefore, the UNSC practically paved the path for an arms race in the region. And given the Iranian government’s nuclear ambitions, this race may insinuate oil-rich Arab states to add nuclear weapons to their arsenals as a deterrent against Tehran’s hostility.

On the other hand, the ayatollahs would supply their proxies across the region with sophisticated weaponry and advanced missiles, which put even European cities at risk. Notably, the government that showed no mercy toward its own people’s peaceful demonstrations won’t obey any rule when be cornered about its survival.

The Iranian people ask the authorities why they pursue to purchase new and complicated weaponry systems while the country severely needs to boost its health apparatus in response to the coronavirus pandemic? All the while these days, the number of the coronavirus victims has reached nearly 100,000 marks, according to reliable reports by Iranian opposition Mojahedin-e Khalq.

Furthermore, the Iranian people consider the regime’s effort to obtain more weapons in a conflict with their national interests and struggle for fundamental freedoms, the rule of law, gender equality, and separation of church and state. They mocked the authorities, asking, “Why the ayatollahs pursue foreign weapons while they proudly unveil Hajj Qassem, Abu-Mahdi, Fajr, Qadr missiles, and SLVs?”