Wall Street Journal: Cooperation among Iran, al Qaeda and other Sunni extremist groups is more extensive than previously known to the public, according to details buried in the tens of thousands of military intelligence documents released by an independent group Sunday.

By SIOBHAN GORMAN  And JAY SOLOMON 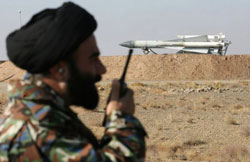 WASHINGTON—Cooperation among Iran, al Qaeda and other Sunni extremist groups is more extensive than previously known to the public, according to details buried in the tens of thousands of military intelligence documents released by an independent group Sunday.

U.S. officials and Middle East analysts said some of the most explosive information contained in the WikiLeaks documents detail Iran’s alleged ties to the Taliban and al Qaeda, and the facilitating role Tehran may have played in providing arms from sources as varied as North Korea and Algeria.

The officials have for years received reports of Iran smuggling arms to the Taliban. The WikiLeaks documents, however, appear to give new evidence of direct contacts between Iranian officials and the Taliban’s and al Qaeda’s senior leadership. It also outlines Iran’s alleged role in brokering arms deals between North Korea and Pakistan-based militants, particularly militant leader Gulbuddin Hekmatyar and al Qaeda.

WikiLeaks released a cache of intelligence documents Sunday that detail raw intelligence reports over a five-year period. The information is fragmentary, and its not known how many reports were corroborated by other sources. “Some parts are more believable than others, but this sort of raw stuff could be gold or a dud,” said a senior U.S. official working on both Pakistan and Iran.

The apparent links are striking because Iran has historically been a foe of the Taliban, who generally view the followers of Shiite Islam—Iran’s predominant faith—as heretics.

The Iranian mission to the United Nations condemned the allegations of ties to extremists. “Any allegation about any collaboration or relation between Taliban and al Qaeda is absolutely false and baseless,” a spokesman said.

In recent years the Taliban toned down their sectarian rhetoric and reached out to Iran, pledging friendly relations with all of Afghanistan’s neighbors should they return to power. Iran has long called for the withdrawal of U.S.-led forces from Afghanistan.

One of the more remarkable reports describes a November 2005 trip that departed from Iran in which Mr. Hekmatyar, the militant leader, and Osama bin Laden’s financial adviser traveled to North Korea to close a deal with the North Korean government to obtain remote-controlled rockets to use against coalition aircraft in Afghanistan.

“The shipment of said weapons is expected shortly after the new year,” the report said.

Several reports describe Iran as a hub of planning activity for attacks on the Afghan government. A May 2006 report describes an al Qaeda–Hekmatyar plot to equip suicide bombers and car bombs to attack Afghan government and international targets—using cars and equipment obtained in Iran and Pakistan.

By April 2007, the reports show what appears to be even closer collaboration. A report that month describes an effort two months earlier in which al Qaeda, “helped by Iran,” bought 72 air-to-air missiles from Algeria and hid them in Zahedan, Iran, in order to later smuggle them into Afghanistan.

Mr. Hekmatyar, the leader of Afghanistan’s Hezb-i-Islami insurgent group, lived in exile in Tehran when the Taliban governed Kabul. He resettled on the Afghan–Pakistani border after the U.S. invasion of Afghanistan in 2001 and established a tenuous alliance with the Taliban and al Qaeda. More recently, he sent a delegation to Kabul to negotiate a peace deal with Afghan President Hamid Karzai and the U.N.

Some reports highlight the political sensitivities Afghanistan is trying to balance between its chief backer, the U.S., and its neighbor to the west.

An April 2007 memo notes that the Afghan Ministry of Foreign Affairs wants to “keep the issue of the Iranian-made weapons recently found in Kandahar under the radar screen in the lead up to the June visit of the Iranian President to Afghanistan” because Afghan President Hamid Karzai wants to avoid “additional friction with Afghanistan’s neighbors.”

Several reports provide new details of the extent of Iran’s reach, including apparent payments to kill some Afghan officials and attempts to buy others off.

Another report two years later shows growing U.S. concern about Iran meddling, including reports from Afghan officials that Iran paid a total of $4 million to as many as 90 members of the Afghan parliament. The U.S. Embassy in Kabul said, however, it found members of parliament were more motivated to support Iran because of local issues, such as the Afghan government’s “poor performance on the issue of Afghans deported from Iran.”

In September 2009, reports continue of Taliban fighters using Iranian-made rocket-propelled grenades to successfully shoot down helicopters belonging to coalition forces. As proof, the report says, “the RPG launcher had markings in Persian Farsi that read//made in Iran//.”

Some of the plots described in the memos stretch credulity, such as one from February 2007 describing U.S. reports that Iran has supplied the Taliban with poison that can be slipped into the food or tea of government officials.

—Yaroslav Trofimov contributed to this article.

In New York, defiant Ahmadinejad says Israel will be “eliminated”

AFP: The United States has authorized the release of a...