Nigeria may report Iran to UN over arms seized in Lagos 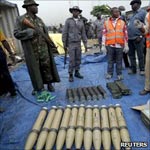 BBC: Nigeria has said it will report Iran to the UN over an arms shipment seized in Lagos, if investigations show sanctions were broken. 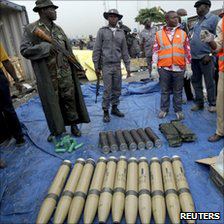 Nigeria has said it will report Iran to the UN over an arms shipment seized in Lagos, if investigations show sanctions were broken.

Iran is under UN sanctions because of its nuclear programme.

But Iran has promised to co-operate with an investigation and has given Nigerian authorities access to a suspect in the Iranian embassy.

Nigeria’s authorities have described discovering an arsenal including rocket launchers, grenades and mortars.

There were fears the weapons might be destined for local groups but security sources say they now believe the arms were not meant to be used in Nigeria.

Nigerian Foreign Minister Odein Ajumogobia told journalists that investigations had shown that the weapons did indeed come from Iran.

He was speaking after meeting his Iranian counterpart Manouchehr Mottaki, who has travelled to Nigeria to discuss the issue.

He said that Nigerian security agents wanted to question two Iranian nationals who are in the embassy but one of them has diplomatic immunity.

“If the Iranians are willing to waive immunity, then we will pursue that,” Mr Ajumogobia said.

It was initially feared that the weapons could be used in Nigeria – by oil militants in the Niger Delta, or Islamist radicals in the north or in elections due next year.

But the BBC’s Caroline Duffield in Lagos says security sources now believe Nigeria’s port may have been targeted as a holding destination – thanks to the country’s reputation for corruption and lax regulations.

The France-based shipping company CMA CGM says there were attempts to send the containers on – to The Gambia, in West Africa – before the Nigerian police seized them.

It says the shipment came from Bandar Abbas, a port in southern Iran.

Two people who handled the shipment have been arrested.

Wall Street Journal: The U.S. has begun to ratchet...