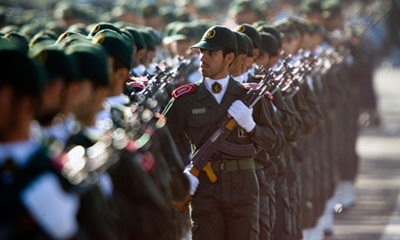 Tehran will face renewed international pressure over its involvement in arms smuggling when a trial scheduled to start today in Nigeria is set to reveal details of a botched Iranian operation to supply weapons to guerrillas in West Africa.

Under United Nations Security Council Resolution 1747, which was passed in 2007, Iran is banned from the purchase or export of weapons. But a detailed investigation by Western intelligence officials following the seizure of weapons at the Nigerian port of Apapa last October has exposed a well-coordinated plot by Iran’s Revolutionary Guards to supply a number of Islamic rebel groups in West Africa. These include Muslim militants in northern Nigeria and other militias battling the government in Lagos for a bigger share of the lucrative oil revenues from the Niger delta.

Some of the weapons, which comprised rocket-propelled grenades, machine guns and assault rifles, were also destined for rebel groups based in Senegal and Gambia. They were concealed in a cargo of construction materials in 13 shipping containers.

A key defendant in the trial will be Azim Aghajani, an Iranian national who has been identified by intelligence officials as a senior officer of the Qods Force, Iran’s Revolutionary Guards unit responsible for supporting overseas Islamist militant groups. He was one of two Iranians who sought sanctuary at the Iranian embassy in Abuja immediately following the seizure of the weapons, which was triggered by a tip-off from the CIA.

The other Iranian was identified as Ali Akbar Tabatabaei, who is described by Western intelligence sources as the commander of Qods Force operations in Africa. He managed to escape to Tehran following an emergency visit to Abuja in November by Manoucher Mottaki, who was then serving as Iran’s foreign minister. Intelligence officials believe that the Iranian regime has now sent Tabatabaei to Venezuela to command Qods Force operations in Latin America.

But Mr. Mottaki failed in his efforts to avoid a major diplomatic incident. The Nigerian government refused to free Aghajani and allow the arms cache to be returned to Iran. Instead, the Nigerians, furious at Iran’s attempts to arm the “Hisbah” Islamist militia in the north Nigerian province of Kano, seem determined to expose Iran’s crimes. Prosecution officials now predict to reveal embarrassing details of Tehran’s involvement in the smuggling operation.

In addition, the Nigerian authorities have provided the U.N. committee responsible for monitoring the sanctions against Iran with full details of the arms find. An eight-member U.N. team, which includes representatives from all five permanent members of the U.N. Security Council, visited Nigeria earlier this month to investigate the shipment before the trial begins.

This is not the first time Tehran has been caught red-handed in arms smuggling operations. Israeli security officials regularly intercept Iranian weapons shipments destined for Islamist terrorists in Gaza and southern Lebanon. And last September Italian officials uncovered several tons of material described by U.N. Security Council officials as “high potential explosives” that were being shipped from Iran to terrorist groups in Syria and Lebanon.

Evidence of Iran’s involvement in the Nigerian arms smuggling operation now threatens to intensify Tehran’s diplomatic isolation, as it will strain relations with a number of West African governments, in particular Nigeria, which currently occupies one of the non-permanent seats at the U.N. Security Council. Western diplomats believe they can now rely on Nigerian support for any new diplomatic effort to strengthen sanctions against Iran for its continued defiance over its illicit nuclear weapons program.

Gabon, Nigeria’s West African neighbor and another non-permanent U.N. Security Council member, is also likely to support a new round of sanctions. Gambia, where Iran has also supplied Islamist militants with weapons, last month formally cut its diplomatic ties with Iran, closing its embassy in Tehran and ordering its ambassador to return home within 24 hours. Dakar is thinking of taking similar measures as some of the Iranian weapons captured by the Nigerians may have been destined for rebels in Senegal.

Iran’s plot of propping up radical Muslims in West Africa has badly backfired. Instead of exporting its Islamist revolution to that part of the world, Tehran has strengthened the efforts led by the U.S. and Europe to stop its nuclear weapons program. The trial in Abuja is not just an embarrassment for Tehran but a major diplomatic defeat.