AFP: President of the European Parliament Jerzy Buzek on Sunday denounced Iran’s hanging of a Iranian-Dutch woman arrested after anti-government protests in 2009 then convicted of drug trafficking. 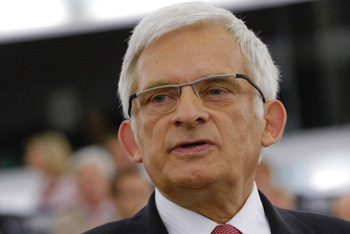 BRUSSELS, January 30, 2011 (AFP) – President of the European Parliament Jerzy Buzek on Sunday denounced Iran’s hanging of a Iranian-Dutch woman arrested after anti-government protests in 2009 then convicted of drug trafficking.

“The hanging of Sarah Bahrami, who was a Dutch and hence a European citizen, is a cowardly act of arbitrary justice,” he said in a statement.

“The European Union condemns the death penalty in principle as a violation of human dignity, but the case of Sarah Bahrami is particularly gruesome.

“She was arrested during the protests against the perverted presidential elections in December 2009,” he continued.

Soon after the re-election of President Mahmoud Ahmadinejad in June 2009, tens of thousands of opposition supporters took to the streets of Tehran alleging that the poll had been was rigged.

“The allegations put forward against her afterwards are more than dubious,” Buzek added.

Bahrami, a 46-year-old Iranian-born naturalised Dutch citizen, was reportedly arrested in December 2009 after joining a protest against the government while visiting relatives in the Islamic republic.

She was hanged early on Saturday.

Iran has already told the Netherlands not to interfere in its domestic affairs, saying police found cocaine during a search of her home.

But Buzek said: “The fact that Dutch representatives had no access to her and were not allowed to provide basic consular services during her trial is a slap in the face of diplomatic standards and recognised judicial procedures.

“This trial was everything but fair and balanced,” he added.

A statement from the Iranian embassy in the Netherlands Saturday said Iran did not recognise dual nationality for its nationals, which meant that her “other nationality did not affect her judicial case in Iran”.

The Netherlands announced Saturday it was freezing its contacts with Iran over the affair.

Buzek warned: “The Iranian regime should be aware that we will not acquiesce in its severe violations of human rights and fundamental freedoms.

“The dramatic increase in death sentences since the protests against the rigged presidential elections is of grave concern.”

AFP: The UN atomic agency has asked to visit...