Iran to be ‘held accountable’ for murder plot: Biden

AFP: Iran will be “held accountable” for its foiled plot to kill Saudi Arabia’s US ambassador, and faces international condemnation for the thwarted assassination, US Vice President Joe Biden declared Wednesday. 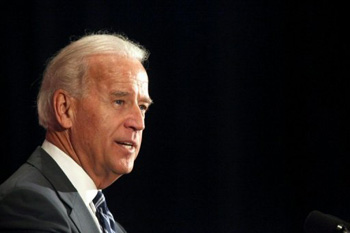 WASHINGTON, October 12, 2011 (AFP) – Iran will be “held accountable” for its foiled plot to kill Saudi Arabia’s US ambassador, and faces international condemnation for the thwarted assassination, US Vice President Joe Biden declared Wednesday.

“Nothing has been taken off the table,” Biden told ABC television’s “Good Morning America” program, regarding Washington’s reaction after the US Justice Department on Tuesday charged two men with conspiring with Iranian government factions to kill Saudi Ambassador Adel al-Jubeir on US soil.

The alleged high-level plot involved detonating a bomb at a restaurant the envoy frequented, an act which could also have claimed the lives of countless of innocent patrons.

“It is an outrageous act, where the Iranians will have to be held accountable,” Biden said.

“The first thing we do is make sure the entire world and all of the capitals in the world understand what the Iranians had in mind,” Biden said.

He called the alleged plot “an outrage that violates one of the fundamental premises, which is the safety and sanctity of diplomats.”

“We’re in the process of uniting world public opinion continuing to isolate and condemn their behavior,” the vice president said.

A criminal complaint in Washington on Tuesday named Manssor Arbabsiar, a naturalized US citizen holding Iranian and US passports, and Gholam Shakuri, an Iran-based member of the Quds Force, a unit of the Iranian Islamic Revolutionary Guard Corps, in the alleged plot.

Biden told ABC that the heinous alleged murder plot would “unite the whole world in the moral disapprobation of the Iranians,” and that the global community would respond accordingly — possibly with a new round of sanctions.

“The world is united,” he said. “It’s not United States versus Iran… the isolation of Iran and the attempt to change the behavior is universal — not just with us.”

AFP: Iran on Saturday dismissed as legally baseless an...