AP: Texas Gov. Rick Perry said Wednesday an Iranian-backed terror plot coordinated in Mexico proves the U.S. must secure its southern border, an attempt to shore up his standing among Republicans on immigration. 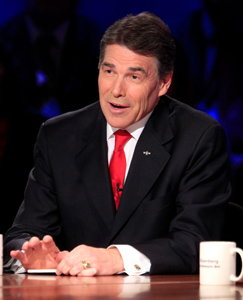 INDIANAPOLIS (AP) — Texas Gov. Rick Perry said Wednesday an Iranian-backed terror plot coordinated in Mexico proves the U.S. must secure its southern border, an attempt to shore up his standing among Republicans on immigration.

The Republican presidential hopeful used Tuesday’s announcement that Iranian forces had sought to assassinate the Saudi ambassador to the U.S. to call for more border troops, improved fencing along the Mexican border and increased border patrols including the use of predator drone surveillance.

Perry opened his speech to Republican activists in Indianapolis on Wednesday with a call for increased border security. He called allegations that Iranian forces sought to kill the Saudi diplomat “business as usual” for Iran.

“We cannot have national security until we have border security,” Perry said.

Federal officials said Tuesday that one of the suspects coordinated with a man he thought to be a member of a Mexican drug cartel. He was a Drug Enforcement Administration informant.

Perry focused the first three minutes of his speech Wednesday on the terror plot and border security, referring frequently to his prepared remarks and talking in a subdued manner. The one-time Republican presidential frontrunner eased up though as he reverted back to talking about energy policy and attacking President Barack Obama.

Perry appeared to use the terror plot as a chance to pivot on his key stumbling point with Republican voters: immigration. Perry has slid in national polling since he spent the better part of last month defending his approval of in-state college tuition for illegal immigrants in Texas.

Pam Casey, a dog-groomer from Indianapolis, said she initially supported Perry but switched to backing former Godfather’s Pizza chief executive Herman Cain after learning about Perry’s immigration policy. She came to hear Perry speak Wednesday to give him another shot.

“I liked him until I heard about him on immigration,” she said.