Wall Street Journal: U.S. officials have uncovered an effort by Iran to help Syria mask its oil exports and evade an American and European embargo, in a potent new sign of Tehran’s campaign to bolster Syrian President Bashar al-Assad as his regime cracks down on public opposition.

By JAY SOLOMON And ALAN CULLISON 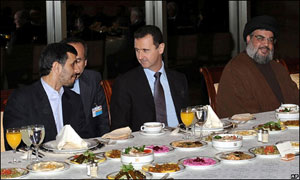 U.S. officials have uncovered an effort by Iran to help Syria mask its oil exports and evade an American and European embargo, in a potent new sign of Tehran’s campaign to bolster Syrian President Bashar al-Assad as his regime cracks down on public opposition.

American officials investigating the Iranian operation said it is designed to quietly ship Syrian crude oil to Iran, where it can be sold on the international market, with revenue going back to Damascus.

“The oil shipment to Iran was designed to evade the sanctions that have been imposed on Syria,” said a senior U.S. Treasury Department official familiar with the case.

In response, the Treasury Department has begun targeting the insurance and registration of international tankers shipping Syrian oil overseas.

Concerns aren’t limited to Iran. Washington and its allies are also intensifying the scrutiny of maritime and air traffic moving into Syria from Russia, as Moscow has publicly committed to continue arming Mr. Assad’s security forces.

But Moscow this week confirmed the arms shipment was made. The ship’s owner, the Russian freight company Balchart, declined to comment.

Russian Foreign Minister Sergei Lavrov on Wednesday defended the arms shipment from Russia to Syria, rebuffing growing American and European calls for Russia to comply with the U.S. and European Union arms embargo on Damascus. “We do not feel we have to explain or justify anything because we are not violating any international agreements or U.N. Security Council resolutions,” Mr. Lavrov said in Moscow. “We are only trading with Syria in items that aren’t banned by international law.”

U.S. and Russian officials are negotiating a Security Council resolution to address the violence in Syria. The U.S. and Europe are pushing for an arms embargo and financial sanctions on the Assad regime as part of the resolution. Moscow has opposed such a measure.

A spokesman for the Iranian embassy at the U.N. said there are no international sanctions on Syria that Tehran needs to respect. He also said that outside powers, not Iran, have been feeding the conflict inside Syria by shipping in arms. “Syria is an independent country, and Iran respects its sovereignty,” said the spokesman. “Iran believes that Syrians have the right to self-determination free from any foreign intervention.”

Russia and Iran historically have been the Assad family’s closest allies. Moscow is Syria’s largest arms supplier and maintains a naval base in Tartus. Syria and Iran closely coordinate in funding and arming the militant groups Hezbollah in Lebanon and Hamas in the Palestinian territories.

The U.S. and EU have focused on drying up Mr. Assad’s oil revenues ever since Syrian security forces began a military crackdown against opposition political activists in March that has left thousands dead.

Damascus has in the past generated roughly one-third of its revenue from oil sales to Europe, according to official Syrian statistics. But Damascus’s shipments have been crippled by U.S. and EU sanctions that ban the financing or insuring of Syrian oil exports, industry executives say.

Mr. Assad’s government has spoken about reorienting its oil sales to Asian countries, such as China and India, to generate earnings.

In late November, U.S. officials said they gathered information that showed Iran was stepping in to aid Syria with its oil trade. U.S. and European officials believe Tehran is assisting Damascus with its military crackdown by providing arms, software, training and intelligence.

U.S. officials and shipping executives said Iran, through a Dubai-based company, Sea Enterprises Ltd., chartered a Greek-owned tanker, the Mire, to ship more than 91,000 metric tons of crude. The Mire loaded the oil from Nov. 19 to 21 at the Syrian port of Baniyas with the intention of delivering it to Iran’s Ras Bahregan oil terminal, the officials and executives said.

The Treasury Department was able to get the Mire’s insurance and registration pulled after telling company executives that the ship was carrying a product sanctioned by the U.S. and EU.

The Mire, like many international oil tankers, uses American insurance, is registered in Liberia and flies under a Liberian flag. The Liberian International Ship and Corporate Registry ordered the Mire’s owners to desist from delivering the oil to Iran, said Scott Bergeron, CEO of the Liberian company.

But the owners ignored the order and discharged the shipment in Iran before eventually returning to the United Arab Emirates. Efforts to reach Sea Enterprises were unsuccessful.

Liberia issued a notice of violation against the Mire’s owner, Eurotankers Inc. of Greece, in accordance with Liberian civil penalty procedures. The company declined to comment.

“We are seeing more and more action taken by both the U.S. and the EU against shipping interests,” Mr. Bergeron said.

Spokesmen for the Syrian government declined to comment. U.S. officials said their strategy of targeting Syria’s shipping was drawn from Washington’s wider financial war against Iran—and say that Iran’s ability to provide financial assistance to Syria is becoming increasingly constrained by the growing sanctions placed on Tehran. Planned EU sanctions on Iran’s oil exports could tighten the screws.

Damascus has been increasingly reliant on oceangoing vessels for arms shipments, because neighbors have been making air shipments difficult, according to U.S. and European officials.

Turkey has been denying overflight rights, halting the shipments to Syria from Iran, according to these officials. As an alternative, Syria has also tried to fly arms in from the Russian exclave of Kaliningrad in Eastern Europe, but those flights have been blocked by neighboring Lithuania.

Tankers used to carry Iran oil are being sold for scrap

Bloomberg: Three of eight tankers that the U.S. Treasury...